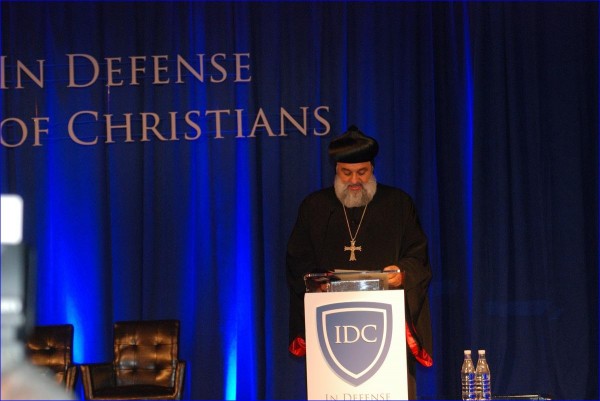 Yesterday, on the third day of the In Defense of Christians summit, Patriarch Ignatius Aphrem II, Syriac Orthodox Patriarch of Antioch, delivered a keynote address on the persecution of Christians in Iraq and Syria. The title of the speech was Do Muslims need Christians in the Middle East?

The Patriarch began by saying “Muslims were welcomed to many major cities in what is today known as Syria, Lebanon and Iraq by Christians…Christians had established the infrastructure of the new [Islamic] state.”

Many of the Christians were forced to convert as a result of the imposition of heavy jizya, poll tax, on them. They often endured many periods of persecution, especially during the Mongol and Ottoman times. The Genocide of Armenians and Syriac speaking Christians unleashed during World War One resulted in the extermination of millions of Christians. In fact, we all are commemorating this tragic event throughout next year as the hundredth anniversary of this atrocity.I believe that Muslims need Christians to challenge themselves to live in a pluralistic and multi-religious society where they can affirm their identity without being afraid of the other. Muslims ought to be able to embrace the values of tolerance and acceptance of the other as a sign of self confidence to prove that Islam as a religion can coexist with other religions without the need to absorb others or the fear that it may be absorbed by others. Living in isolation will keep Muslims ignorant of the other and ignorance is the mother of all fear.

It’s high time for Muslim scholars and religious leader to prove to the world that these groups do not represent true Muslim teachings.

I conclude by calling upon the international community to help us Christians stay in our homelands, in the lands that are forefathers for two millennia witnessed for Christ and for many millennia lives as the people, indigenous people of that land.

By calling upon them [international community] to help us stay in our homeland we also want them to work hard to make sure that these Christians should be protected, should be provided with dignity, with honor, and should not be subject to attacks such as we are seeing today.