Assyrians in Detroit Ask for Help in Iraq

Source: AINA
Natalya Mihailova | 16 September 2014
Assyrian Chaldean Bishop Emeritus Ibrahim Ibrahim said President Barack Obama 'assured that the United States will do whatever is possible to get rid of ISIS.' Concerned about the worsening condition of minorities in their native land, metro Detroit Iraqi-American Christians are lobbying U.S. officials and politicians, asking for their help as ISIS advances across Iraq. 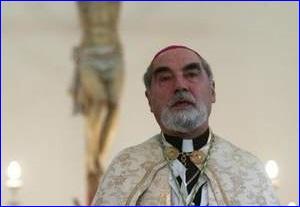 Chaldean Bishop Emeritus Ibrahim Ibrahim of Southfield and a few other Christian leaders met with President Barack Obama in the White House late last week to express their worries about Christians fleeing their homes because of the militant extremists. They talked on Thursday for about 35 minutes, with National Security Adviser Susan Rice attending for part of the meeting, Ibrahim said.

Ibrahim said that Obama was sympathetic to their concerns.

“He promised that he will try to do his best,” Ibrahim said of Obama’s remarks to him and others. “He assured that the United States will do whatever is possible to get rid of ISIS.”

In addition to Ibrahim, the meeting included Christian patriarchs who are Lebanese, Egyptian and Armenian, among others.

The meeting with Obama took place on the last day of a three-day conference, titled In Defense of Christians, held in Washington, D.C. It featured talks by Arab Christian leaders, Sen. Debbie Stabenow, D-Mich., Sen. Ted Cruz, R-Texas, and other politicians.

Joseph Kassab, president and founder of Iraqi Christians Advocacy and Empowerment Institute, in West Bloomfield, helped organize the conference. He said the situation for Christians in Iraq is “going from bad to worse.”

Like thousands in metro Detroit, Kassab has roots in the Christian village Tel Keppe, a village where residents were driven out in recent months. Michigan has one of the biggest Iraqi-American Christian populations in the U.S., including Chaldeans, Assyrians and Syriacs.

“I was born in Tel Keppe,” Kassab said. “It bleeds my heart when I see something like that happening there. It was a peaceful place. Now, it’s completely empty of Christians.”

Christians are afraid to go back because ISIS booby-trapped their village and their Muslim neighbors worked with ISIS to drive them out, Kassab said.

Kassab said the conference tried to bring attention to the plight of Christians in the Middle East.

Also last week, U.S. Rep. Juan Vargas, R-Calif., introduced a bill in Congress that would allow entry into the country for refugees from Iraq and other Middle Eastern countries who face discrimination. If approved, it would bring in about 20,000 to 30,000 refugees, Kassab said.

“The United States has a moral obligation to help the Iraqi Christians inside and outside of Iraq, because our foreign policy has caused this dire situation,” said Auday Arabo, a Chaldean advocate in West Bloomfield, who helped push for the bill.

“Our administration is slow in reacting to this slow genocide. People are dying every day from something we caused. Like Gen. Colin Powell said prior to 2003, if we break it we own it, and our foreign policy has broken Iraq.”