Source: ROCOR
Natalya Mihailova | 10 May 2014
On May 1-4, 2014, with the blessing of His Eminence Metropolitan Hilarion, First Hierarch of the Russian Orthodox Church Outside of Russia, Canberra, the capital of Australia, hosted the 7 th Church Music Conference of the Diocese of Australia and New Zealand. 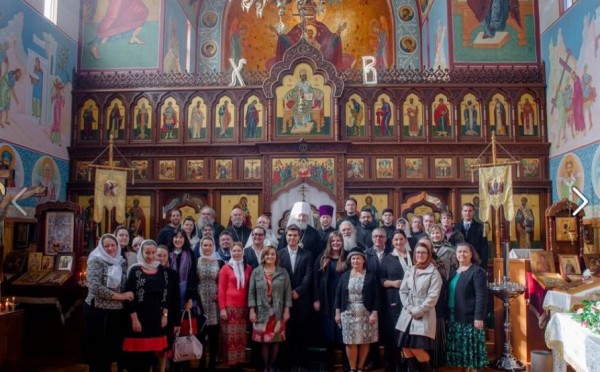 These conferences have become a tradition in the diocese and they are eagerly awaited by choir directors and singers, who participate in a friendly and prayerful atmosphere. This year the event drew about 50 participants from Sydney, Melbourne, Brisbane, Adelaide and Canberra. The organizing committee of St John the Baptist parish worked hard, headed by its rector, Protopriest Alexander Morozov. Thanks to the efforts of his son, Nicholas, Valentina Minutello and their helpers, the conference was a success. The event was held in the parish school. The parish sisterhood, headed by Irina Ovchinnikova, prepared the meals, and refreshments of cheese pascha and tea were made available during breaks.

The topic of this year’s event was “From Chant to Chesnokov.” Speaking were specialists from throughout the world: Moscow, Washington DC, as well as Australia: Georgy Safonov, Head of St Danilov Monastery’s Holiday Choir in Moscow, Protopriest George Johnson, member of the Eastern American Diocesan Music Committee and rector of Holy Apostles Church in Beltsville, MD, Hieromonk Sergi (Shatrov) from Holy Transfiguration Monastery in Bombala, NSW, and others.

The conference began Thursday morning , May 1, with the traditional moleben . A singing rehearsal then commenced , covering the music of all – night vigil and Liturgy . Leading them was Mr Safonov, Andrei Laptev and Nikolai Kovalenko. After lunch, the participants were separated into Russian and English groups. 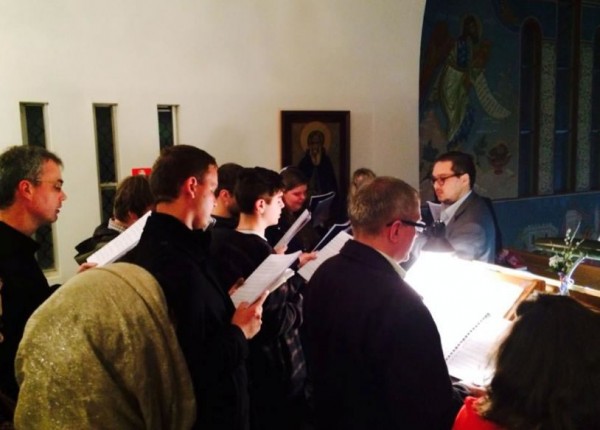 Rehearsals were interspersed with workshops. Three or four groups worked in different classrooms.

The singers also attended lectures. Mr Safonov, who has led his choir in Danilov Monastery—a major center of Russian Orthodoxy–for over 20 years, is already known to the Russians of Australia. He had visited the nation in 1999 to attend a music conference in Melbourne. Since then he made two more trips, and is now visiting for the fourth time. He discussed the oeuvre of Pavel Grigorievich Chesnokov and the Moscow School of music. Fr George talked about his path to Orthodoxy and shared his experience with translating and arranging church music for English singers. Fr Sergy talked about znamenny chant . All three referenced the main notion that text is most important in church music, and that the music must supplement it and not hinder the understanding of the words.

Saturday’s vigil was sung by two choirs, antiphonally, in Slavonic and English, and the singers united to sing Divine Liturgy the next day. His Eminence Metropolitan Hilarion officiated along with Fr Alexander, Fr George, Priest Seraphim Slade and Protodeacon Alexander Kotliaroff. The worshipers praised the Risen Christ and the Holy Myrrh-Bearing Women, whose feast day it was.

Elena Tikhomirova, a first-time conference participant, said: “I was very impressed by this conference. Among the many pieces of music were works by Arkhangelsky, Kastalsky, and of course Chesnokov. Characteristic of his compositions is a beginning sung in unison, then dividing into up to five voices. At first this was bewildering, then as we learned the music, we began to sense something great, and unusually joyful. Our “three giants” are the choir directors Georgy Safonov from Moscow, Andrei Laptev from Sydney and Nikolai Kovalenko of Melbourne, who patiently yet firmly forged all the singers into one choir. And we began to sing well together!”

The walls of St John the Baptist Cathedral had probably never heard such a booming and united “I o vsekh i za vsya.”

The participants will long remember the words of guidance from the Will of Vladimir Monomakh :

“Pray fervently in the 3 rd , 6 th and 9 th hours, for the devil fears a singing Christian.” Vladyka Hilarion’s smile during the singing of Eis polla and Many Years will long be remembered by Irina Tikhomirova.

The joy of Gethsemane that the conference imparted to the singers will warm these Christian hearts for many years.