The ceremony took place in the wild mountains of Murganas in the prefecture of Thesprotia, in the icy waters of river Lagavitsa.

A 52-year-old woman, Anna Gazendam, originally from Holland, living in Australia since the age of 4, was converted to the Orthodox faith by her husband, John Sullivan. 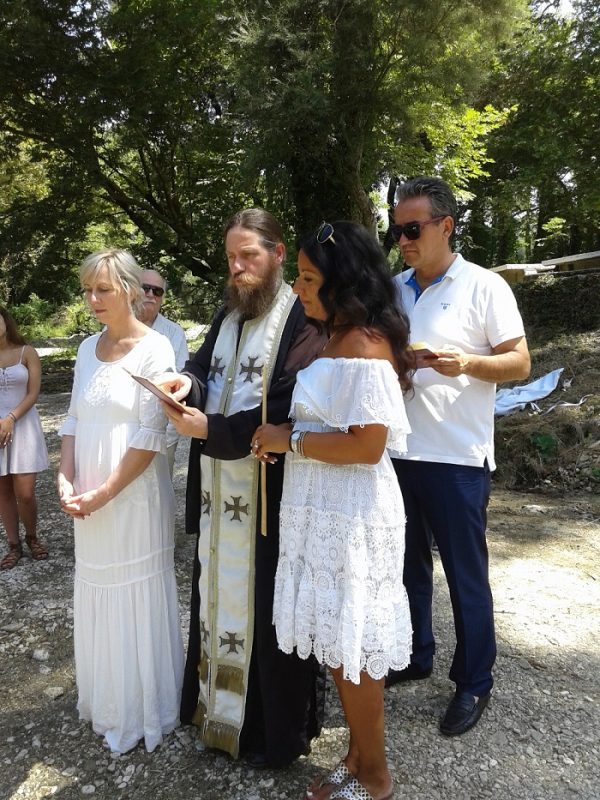 Sullivan, in a very difficult phase of his life, found support and help by a priest of the Greek Orthodox Archdiocese of Australia.

He was baptized a Christian Orthodox in Australia and then persuaded his wife to do the same.

Anna chose to be baptized in that beautiful region of Greece because she was moved by Nikos Gatzogiannis (Nicholas Gage) book ‘Eleni’.

The book, which was adapted into a movie starring John Malkovic in the 1980s, has been turned into something of a gospel for the anti-communist side of the Greek civil war over the years.

The autobiographical memoir, which describes the life of Gatzogiannis’s family in Greece during the Second World War and the subsequent Greek Civil War, is set at the near-by village of Lia.

Anna met with the Greek-American author who lives in the US, but regularly visits Greece and Lia.

Accompanied by her husband and three children, they visited Lia, they stayed in the guesthouse that Gatzogiannis built, and arranged the details of the baptism.

Gatzogiannis was also present in the ceremony.

Relics of Agios Nektarios, which were kept in a special casket in front of his icon, in the…

Most viewed articles
Don’t Poke the Bear: Three Reminders about the Reality of Demons253
Who are the Right People, and Who are the Wrong People?198
Patriarch Daniel Urges Everyone to Pray and Take Care of Their Health During the Pandemic92
Drifting Away91
Patriarchate of Antioch Warns Parents Against Violent Shows72
Most popular authors
Fr. Gabriel Bilas253
Bishop THOMAS Joseph and Fr. David Hyatt198
Aurelian Iftimiu92
Priest Luke A. Veronis91
Pravmir.com team72