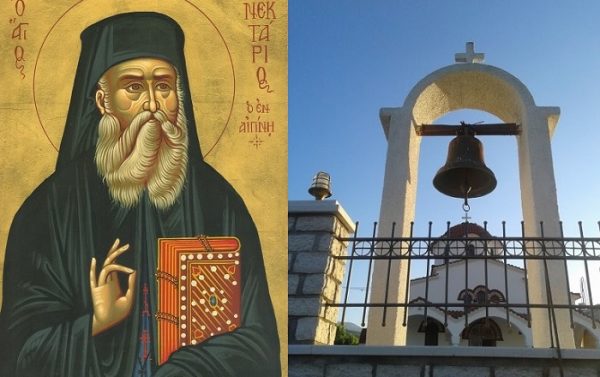 The thieves broke into the church in the middle of the night and, for an unknown reason, removed the holy relics which are visited and revered by thousands of Orthodox faithful every year.

Nektarios, born in the mid-nineteenth century and died in the early twentieth century. Born in Selyvria, Thrace (part of present day Turkey), in October of 1846 as Anastasios Kephalas, Nektarios (his ordained name) began working and studying in Constantinople at the age of 14.

In 1904 at the request of several nuns, he established a monastery for them on the island of Aegina. The monastery was then named Holy Trinity Monastery.

In December of 1908, at the age of 62, Nektarios withdrew to the monastery on Aegina, where he lived out the rest of his life as a monk. He wrote, published, preached, and heard confessions from those who came from near and far to seek out his spiritual guidance.

Thousands of miracles have been attributed to his intercession, with cases of cancer in particular, and other serious illnesses being totally cured.

Nektarios died on the evening of November 8, 1920, at the age of 74. He was buried at the Holy Trinity Monastery on Aegina. His relics were removed from the grave in 1953 and parts were given to different churches around the Greek Orthodox world.

Some relics were kept at the Church of Agios Nektarios, in the village of Platanitis, from where they were stolen on Thursday.

Ηe was officially recognized as a saint by the Ecumenical Patriarchate of Constantinople in 1961. His feast day is celebrated annually on November 9.