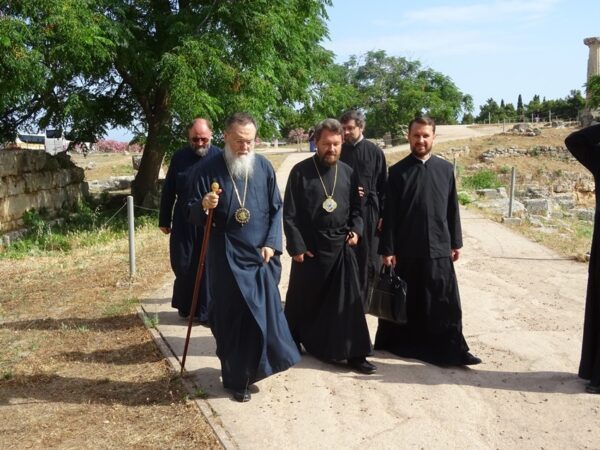 On 23 June 2019, Metropolitan Hilarion of Volokolamsk, chairman of the Moscow Patriarchate’s Department for External Church Relations (DECR) arrived in Greece with the blessing of His Holiness Patriarch Kirill of Moscow and All Russia. Accompanying Metropolitan Hilarion are Archpriest Igor Yakimchuk, DECR secretary for inter-Orthodox relations; hieromonk Grigory (Sokolov), a DECR staff member, and sub-deacon Vyacheslav Li. The pilgrimage is timed to the memorable events in honour of St. Paul to be held in the dioceses of the Orthodox Church of Greece and include visits to the sites where the saint preached.

On June 24, the DECR chairman visited the diocese of Corinth. Being accompanied by Metropolitan Dionysios of Corinth, he saw the ruins of ancient Corinth, the sites where St. Paul stayed, and monuments of the early Christian and Byzantine periods. The pilgrims visited the Cathedral Church of the city and were welcomed by Metropolitan Dionysios at the premises of the metropolis. He told them about the history of his diocese and the life of the church at present.

That same day Metropolitan Hilarion visited the Piraeus metropolis where he was welcomed by Metropolitan Seraphim of Piraeus. The guests visited the Church of Sty. Nicholas and the Cathedral of the Holy Trinity and venerated the relics of St. Nectarios of Aegina. Together with Metropolitan Seraphim the DECR chairman visited the Russian cemetery in Piraeus and celebrated requiem litiya for the compatriots buried in the Greek land. Attending the service at the chapel of St. Olga Equal-to-the-Apostles were Archpriest Alexander Nosevich, staff of the Embassy of the Russian Federation in the Hellenic Republic, and members of the Russian-speaking community in Greece.