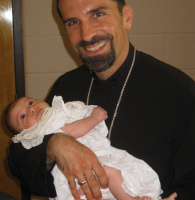 The Rev. Fr. Robert Miclean serves at Holy Archangels Orthodox Church, OCA. Fr. Robert was born on the Feast of the Holy Cross, September 14, 1969 in Redwood City, CA. He completed his M.Div. from Nashotah House Theological Seminary in Wisconsin in 2002 and the St. Stephen’s Orthodox Theological Studies Course through the Antiochian and Ukranian Archdioceses in 2005. Fr. Robert was ordained to the diaconate in 2009 and to the priesthood in 2010 by His Beatitude, Metropolitan JONAH, at St. Nicholas Orthodox Cathedral (OCA) in Washington, D.C. Since 2004 he has served as full-time OCF chaplain at St. John’s College and the U.S. Naval Academy. He now shares his chaplaincy duties with his pastoring of the Mission community. Fr. Robert is an evangelist at heart, desiring to help all those “storm-tossed” on the waves of our culture to find safe harbor in the ship of the Church that leads us to further up and further in God’s eternal Kingdom.

“Forgiveness Is Not an ‘Optional’ Part of Our Life in Christ”

The Parable of the Rich Man and Lazarus As an Opportunity for Conviction, for Growth, and for Change

We Have to Be Ready to Accept God’s Healing: On the Seventh Sunday After Pentecost

To be deified, we cannot be ‘couch potato’ or ‘arm chair’ Christians. It’s easy to fall into a rut, preferring our own opinions and ways to those of the Church, listening to the culture instead of ...

Choosing to Be Free of the Demons: On the 5th Sunday after Pentecost

With regard to demonic possession, we have no reason to believe that it does not continue in our own day; in fact, we can be sure that it does. The same demons active in Christ’s day, are still ...