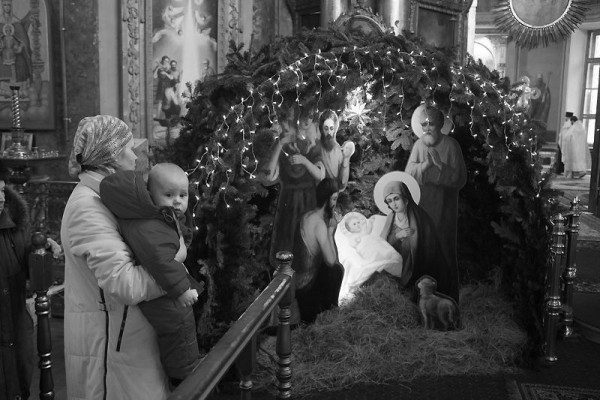 The early Orthodox Church lived in a constant state of alertness, readiness, to meet the Lord at His Second Coming, putting Christ first and before all things the world had on offer. It was not easy to be a Christian; you knew that at any moment you might be arrested, tortured, and martyrd for your faith in the one, true God. Christ having ascended in glory, we now live in the last epoch, that is, “the last days.” We who are here today are even closer to that final day that will begin the day that has no end.

Indeed, this is the truth we commemorate every Vespers service as we sing the Gladsome Light, Phos Hilaron in the original Greek. We’re called to live with eternity before our eyes, to put away the temporal distractions that lull us into spiritual sleep and slothfulness so that we can be ready for the Day of Christ’s dread Judgment. Advent is never just about looking to the past, the Incarnation-in-the-flesh of our Lord, God, and Savior Jesus Christ into the world. It is also always a looking forward to a second Advent, that of Christ’s glorious Second Coming. St. Cyril of Jerusalem writes, “We do not preach only one coming of Christ, but a second as well, much more glorious than the first. The first coming was marked by patience; the second will bring the crown of a divine kingdom.”

That we may be ready when He comes, that we may make the most of this holy Nativity Fast in spiritual preparation for “the Winter Pascha,” Holy Nativity, St. Paul urges us in today’s Epistle (as he does elsewhere in the Scriptures, e.g., I Thess. 5:1-11) to the exercise of such great vigilance. He reminds us first of what should be the fruit of our life in Christ by the Holy Spirit: goodness, righteousness, truth—all of which is defined not by ourselves, not by our culture, but by God Himself who is the Truth, Who has became incarnate to enlighten every human being with that Truth, life in and through Him.

Our Lord Jesus Christ is concerned that we be watchful, “awake”, alert, to the needs of our souls, of our need for life with Him, because He knows and reveals to us that this is the difference between true life and a living death. Do we know and are we in communion with Him who is Life itself or do we preoccupy ourselves with the things of this world to the neglect and lethargy of our eternal souls?

And so, during this Nativity Fast, Advent, we are called upon to heed the prophets’ warnings, to rouse ourselves from sleep and renew our zeal for life with God, the only true life there is. “Therefore St. Paul says today, “Awake, you who sleep, arise from the dead, and Christ will give you light.” This is the choice that is laid before us: life with God or death without God.

Modern man is particularly challenged to keep these words because we so easily live in the relative comforts and distractions of our work-a-day world, where we seek to surround ourselves with material safety and distraction, which serves to ‘numb’ the hunger of our souls for more of our life-source, God, our Creator and Savior Jesus Christ. Most of the time, people don’t seem to ‘need’ God because their days are filled with such distraction and entertainment; their physical or material needs are met and they live in relative ease.

St. Paul calls on us with Christ’s Gospel to “redeem the time, because the days are evil.” People walk around, busy in their lives, and forget God. Evil ensues, by definition. Without God, evil will happen. Where God is, there is true love, light, peace. Where He is forgotten, there is no accountability or bounds to human behavior. Humanism ensues: mankind deciding for himself what is good and what is evil, or perhaps as the terrorists, deceived by the demons into thinking that the evil they perpetrate gives glory to God. We’ve seen how this plays out writ large in the events of the 20th century and, now, sadly, continuing to our own day.

While immorality was rampant in pagan Rome, the pagan Romans themselves would be appalled at the atheism and godlessness of our own day. Pagan as they were, they all believed in some deity, even if that deity turned out to be a demon in the guise of some pagan god of the Greeks. Indeed, this was the charge they labeled the Christians with the charge of “atheism” because the Christians believed in the one, true God and not the panoply of false gods of the Romans.

For this reason, St. Paul warns us today, “Have no fellowship with the unfruitful works of darkness, but rather expose them. For it is shameful even to speak of those things which are done by them in secret.” We are returning to a pagan era, but not one that is as “religious” as was pagan Rome. Instead, “religion” comes in a new guise, that of secular humanism and nihilism, which prides itself on being “free” of the constrains of the religions of the past, and yet is, ironically, enslaved to its own false belief that mankind is always improving itself and that each generation is wiser and more “evolved” than the one that came before—a dangerous precedence that can lead us to repeat the sins and evils of the past in their overconfidence and prideful reliance on self.

Because God loves us to such a great extent, more than you and I can know, He warns us, beckons us, to redeem the time, that is, to learn to number our days, to make use of them for repentance, to shake off our spiritual lethargy, to flee from the immorality around us, to ready ourselves for His awesome and glorious Second Coming.

You and I have to continue to become more and more Christ-minded; so much so that we turn to Christ whenever we sin, and then, whenever we’re tempted, and then, whenever and at every time and season as we progress in the life of faith. It’s not man that saves man, but God who saves man and calls him back to His first beauty through the life in Christ and communion with the Holy Trinity.

Redeem the time, love the people of this fallen culture and land enough to hold up to them the truth of Christ, a life of repentance, confess the vices and sins that the world no longer has a conscience to confess. Speak the truth in love and strive with all your heart to live out that truth of Christ in your own daily life. Model the faith humbly, vulnerably, to all those around you. Share with others who are fallen away, skeptics, who are following the way of the culture and its secularism and hedonism, the truth of what Christ God is doing in your life, forgiving, healing, saving you, giving you joy grounded in Him who is Eternal Life. 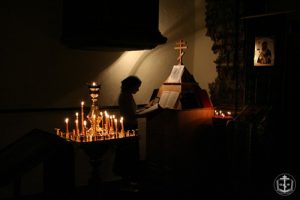