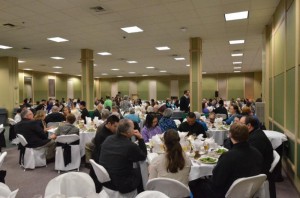 On the evening of Friday, February 21, 2014, a banquethonoring the newly consecrated Bishop David of Sitka and Alaskawas held at the University of Alaska’s Lucy Cuddy Center, Anchorage, AK.

Serving as emcee was Sheri D. Buretta, a life-long member of Anchorage’s Saint Innocent Cathedral where her father is “Starosta,” who chairs the Chugach Alaska Corporation.  [Chugach Alaska Corporation is one of 13 regional Alaska Native corporations created by the Alaska Native Claims Settlement Act in 1971 by the US Congress.  The Chugach Region comprises some 10 million acres in South-central Alaska.  This system of corporate ownership of assets was developed to ensure long-term profitability and financial independence for Alaska Natives.]

“I wish I could adequately convey the warmth, good humor, emotion, energy and renewed sense of purpose and direction so evident at the banquet,” said Archpriest John Jillions, OCA Chancellor.  “I felt like I was watching a community bond between bishop and people being forged in front of my eyes.”

That “forging” began with His Beatitude, Metropolitan Tikhon, who publicly thanked His Eminence, Archbishop Benjamin for his five years of service and ministry as Locum Tenens of the vacant See of Sitka.  Turning his attention to Bishop David, the Metropolitan noted with good humor that he had served in the Diocese of Philadelphia and Eastern Pennsylvania during the Metropolitan’s years serving that diocese, adding that as a priest, Bishop David had been known for his hard work, pastoral care and candid feedback to the bishop. “Be a witness to Christ where you are,” he said.  “You now have a father in Christ who can help harness your energy and lead you in the direction of the heavenly Kingdom.”

Archbishop Benjamin reflected about the years he served in Alaska—on and off since 1998.  “I will always carry you in my heart,” he said with deep emotion, while exhorting Bishop David “to be the presence of Christ among his people.”

Priest Mark Dunaway, pastor of Saint John Antiochian Orthodox Church, Eagle River, AK—one of three Antiochian parishes in the state—greeted Bishop David on behalf of His Eminence, Archbishop Joseph of the Antiochian Diocese of Los Angeles and the West.

One of Bishop David’s sons, Sterry Michael Mahaffey, offered a moving testimony on behalf of his family.  He recalled how his father balanced Church and family life over decades, showing love and care to all especially during his beloved Matushka Karen’s lengthy illness and repose.

Finally, Bishop David addressed the gathering, sharing his vision for the Church in Alaska.  He emphasized the importance of overcoming resentments and problems of the past through trust in God’s providence and His grace, which transform difficult times into “raw material for spiritual growth.”  His desire to move forward in working with the diocese’s clergy and faithful was evident, especially in the area of inspiring others to pursue the priesthood and diaconate and to serve as trained readers in village parishes.  He concluded by calling upon one and all, in every parish, to contribute his or her talents, that all might work together for the singular purpose of proclaiming the Good News of Jesus Christ.