Source: http://www.interfax-religion.com/?act=news&div=13145
Natalya Mihailova | 29 July 2016
Oryol, July 29, Interfax - Prince Vladimir, who baptized Russia in 988 and thus united lands into a powerful state, must become an example for rulers of the whole world, Patriarch Kirill of Moscow and All Russia said after a prayer service at the Epiphany Cathedral in the center of the town of Oryol. 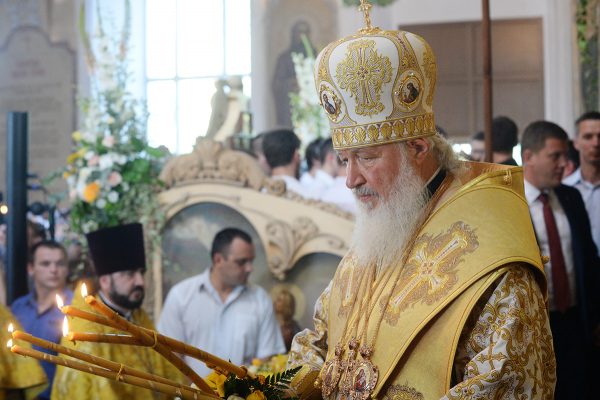 Known for being cruel and unjust, Prince Vladimir was transformed by baptism so much that people called him the Red Sun, the Church leader said. “You don’t call someone like that out of fear, but only out of love,” the patriarch said, adding that the prince “transformed not only himself, but also ancient Russia into a powerful unified state.”

“Prince Vladimir must be an example for all rulers, both ours and possibly the world over,” Patriarch Kirill said.

“Especially today, when infighting and terrible conflicts accompanied by manifestation of cruelty and human malice are taking place across Prince Vladimir’s historical Russia, it is very important for the rulers who are thinking of the need to unite people regardless of their various views and beliefs, to be guided by love, Christian wisdom, so that their personalities, to use modern parlance, and there policies were appealing to the people. And in saying this I think above all of Ukraine,” the patriarch said.

The Epiphany Cathedral was not big enough to admit everyone who came. Several hundred people watched the church ceremony broadcast live onto a video screen in a nearby park. Volunteers from Epiphany Family, a regional Christian Orthodox youth movement, were there to help believers find their way around the place and give them water. All visitors were given pocket-sized icons of the Saint Prince Vladimir with a patriarchal blessing on the reverse side.

After the service Patriarch Kirill blessed a monument to St. Seraphim of Sarov on the grounds of the Epiphany Cathedral.