Source: Greek Orthodox Archdiocese of America
Natalya Mihailova | 15 October 2016
NEW YORK – The first complete biography on His All-Holiness Ecumenical Patriarch Bartholomew, titled “Bartholomew: Apostle and Visionary,” authored by Fr. John Chryssavgis and published by Thomas Nelson Publishing has just been released, in time for the 25th Anniversary of His All-Holiness’ elevation to the venerable Patriarchal Throne of Constantinople. 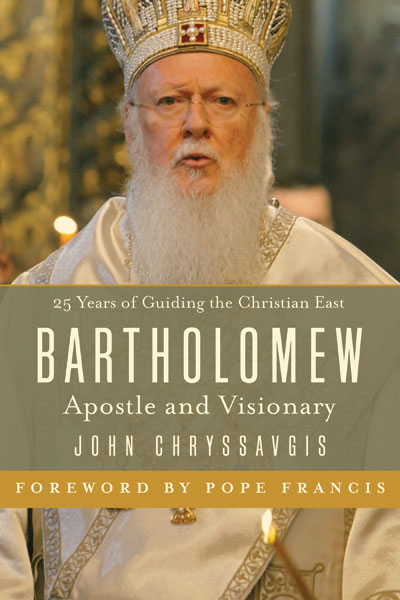 Ecumenical Patriarch Bartholomew, spiritual leader of the world’s 300 million Orthodox Christians for an unprecedented 25 years, continues to build bridges across all faiths and cultures from Constantinople (now known as Istanbul), a city of central importance to Christian history and the development of Christian doctrine.

This excellent biography of His All-Holiness, paints a picture of a strong, humble leader who is well loved across a wide variety of political and religious boundaries.

“The book provides an unfolding narrative of the Ecumenical Patriarch’s spiritual path in life, which begins on the island of Imvros and culminates in his ministry as the Ecumenical Patriarch. Over the past twenty-five years the Patriarch has drawn the respect of the world of the Church with the depth of his humility, height of his intellect and power of his example as a tireless servant of the Gospel,” said His Eminence Archbishop Demetrios, Primate of the Greek Orthodox Church in America.

For over 1,700 years, the Ecumenical Patriarchate has remained in present-day Istanbul and has been a force in the region of the Middle East supporting both the diminishing Christian presence, as well as establishing dialogue with Islam, Judaism and the wider interfaith community, and most recently the big achievement of convening the first Holy and Great Council of the Orthodox Church in over 1,200 years in June of 2016.

Author Fr. John Chryssavgis, Archdeacon of the Ecumenical Patriarchate, has woven together the incredible story of a man who has longed to serve God, the Church, and the world his entire life.