Bartholomew: With Francis, we invite all Christians to celebrate the first synod of Nicaea in 2025

Source: AsiaNews.it
In an interview with AsiaNews , the Ecumenical Patriarch of Constantinople reveals the future steps to strengthen unity between Catholics and Orthodox. In addition to the appointment of Nicaea, the first truly ecumenical council , in the autumn the next meeting of the Catholic-Orthodox Joint Commission will be held in Jerusalem, where everyone "must commit themselves without hypocrisy".
Natalya Mihailova | 30 May 2014
Istanbul (AsiaNews) - On his return from Jerusalem , where he met with Pope Francis at the Holy Sepulchre, the Ecumenical Patriarch of Constantinople, Bartholomew I, has revealed an important appointment for unity between Catholics and Orthodox: a gathering at Nicaea in 2025, where the first real ecumenical council of the undivided Church was celebrated. 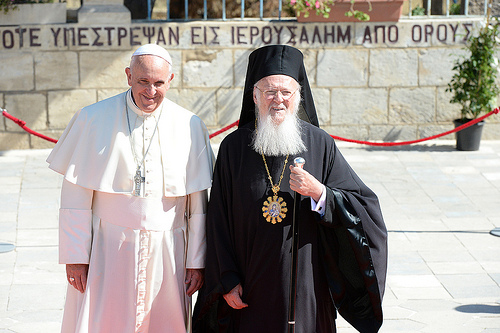 Speaking exclusively with AsiaNews, Bartholomew says that together with Pope Francis “we agreed to leave as a legacy to ourselves and our successors a gathering in Nicaea in 2025, to celebrate together, after 17 centuries , the first truly ecumenical synod, where the Creed was first promulgated”.
The Council of Nicaea (now Iznik, 130 km south- east of Istanbul) , brought together more than 300 bishops from East and West in  325 and is considered the first true ecumenical council. It was there that the formula of the Creed was decided, similar to the one recited during the liturgy today, saying that Jesus “is co-substantial to the Father,”to counter the Aryan ideology.

Francis and Bartolomew met to mark 50 years since the embrace between Paul VI and Athenagoras. The 1964 meeting broke a centuries old silence between the Christian East and the West, with all the socio-political consequences that have arisen, and from which Europe still suffers.

The meeting at the Holy Sepulchre has revitalized dialogue between Catholics and Orthodox , two Christian visions that despite their differences, have a common vision of the sacraments and  apostolic tradition.

“The dialogue for unity between Catholics and Orthodox – Bartholomew tells AsiaNews – will start again from Jerusalem. In this city, in the autumn , a meeting of the Catholic-Orthodox Joint Commission  will be held hosted by the Greek -Orthodox patriarch Theophilos III . It is a long journey in which we all must be committed without hypocrisy”.

“Jerusalem – continues Bartholomew – is the place, the land of the dialogue between God and man, the place where the Logos of God was incarnated. Our predecessors Paul VI and Athenagoras have chosen this place to break a silence that lasted centuries between the two sister Churches”.

“I walked with my brother Francis in the Holy Land not with the fears of Luke and Cleopas on their way to Emmaus (cf. Luke 24: 13-35), but inspired by a living hope which we learn from our Lord”.