Have you had a particular bad thought that caused you problems? Sometimes it is just in our minds, and other times it manifests itself in our lives. Have you ever confessed that particular sin, only to have it rear its ugly head soon afterward? I am betting you have … unless somehow you are unlike everyone else in this world. If it has happened to you, then you probably said something like me: “Hey, wait just a minute here … I confessed that sin and I know God has forgiven me that sin! How could it be back in my head? Shouldn’t I have total victory over it when I confessed it? Maybe God didn’t forgive me after all!”

The details of your particular struggle are not the subject of this article. Suffice it to say that within us all there is a battle that takes place within our minds. The enemy of our souls always attacks us at our weakest point. For some it is lust … for others greed … or pride … or slander … or … the list just goes on and on. Often these evil thoughts have already been confessed, but they continue to plague us. It is so very important to realize that just because someone has confessed these thoughts as sin, doesn’t mean that they will suddenly have great victory over it. Often spiritual warfare will increase after confession, because the enemy is losing ground. 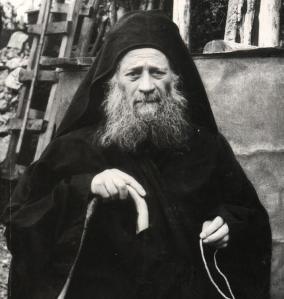 The Elder Joseph the Hesychast

What is being experienced in this is the same type of warfare that many of the great saints of our faith went through: attacks in the mind. They won victory – sometimes after years of struggle – but they won. The Elder Joseph the Hesychast (+1959) went through many, many years of such a battle and eventually was given victory. I recommend the book named after him for some excellent reading. Ultimately, what made him such a great man of God was not the actual victory, but the years of struggle. He didn’t give up the fight, even though it was so very discouraging to him at times, to the point of shedding many tears. He didn’t realize it at the time, but God was using his struggle to mold and shape him into the man of God he would become.

Much of the shaping of our spiritual lives takes place in the struggle, not in the victory. God will use our struggle to shape us into the vessel He has in mind for us to be, and only He knows what that will be. In Jeremiah 18, the Holy Prophet is told by God to go down to the potter’s house and watch him. This is what he saw and what he was told by God: “Then I went down to the potter’s house, and there he was, making something at the wheel. And the vessel that he made of clay was marred in the hand of the potter; so he made it again into another vessel, as it seemed good to the potter to make. Then the word of the LORD came to me, saying: ‘O house of Israel, can I not do with you as this potter?’ says the LORD. ‘Look, as the clay is in the potter’s hand, so are you in My hand.’”

Struggling with evil thoughts is not an easy task. There are some who will eventually shake an angry fist at God and demand to know where He is, why He hasn’t given them victory over this matter: “God, I have confessed it to you and I have begged for help. Why have you abandoned me to this sin?” Yet, perhaps it is simply the Potter’s way with me, the lump of clay, to make me into something more. These words of St. Paul in Romans 9 say it well: “But indeed, O man, who are you to reply against God? Will the thing formed say to him who formed it, ‘Why have you made me like this?’ Does not the potter have power over the clay?”

The important thing is that we fight; we do not quit struggling, no matter what. It is in the struggle that we grow, even though it is so very uncomfortable. Also, we should return to the Lord in confession regularly, confessing our struggle with this matter. It is in confession that we will find medicine for our souls. We need to realize that some medicines take time, but it is vital to keep taking it. So it is that we continue to receive the spiritual medicine we need through confession.

To the question, as to how to be rid of persistent evil thoughts, Abba Poimen answered in the fourth century: “If a man has on one side of him fire, and on the other side a vessel with water, then if he starts burning from the fire, he takes water from the vessel and extinguishes the fire. Like to this are the evil thoughts, suggested by the enemy of our salvation, which like a spark can enkindle sinful desires within man. It is necessary to put out these sparks with the water, which is prayer and the yearning of the soul for God.”

Back in my smokejumping days with the Forest Service, most of the forest fires we parachuted in to fight were caused by lightning strikes. No sooner would we have one fire under control than we would have another one to fight, and another, and another. Lightning does not simply strike once in a storm, and certainly evil thoughts in the same way do not simply come our way once. If an evil thought has caused us to stumble at some point, then we will be tested by that thought many times. So it is that we will need to be putting that “water on those sparks” that Abba Poimen mentioned, over and over again. No matter how long the struggle continues, it will always be worth it!

Let the final thought on this matter be from that man who finally found victory after so many, many years of struggle, the Elder Joseph the Hesychast:

God always helps. He always comes in time, but patience is necessary. He hears us immediately when we cry out to Him, but not in accordance with our own way of thinking .… Since you do not see beyond what is apparent and do not know how God governs the world, you want your request to be fulfilled like lightning. But this is not how things are. The Lord wants patience. He wants you to show your faith. You cannot just pray like a parrot. It is necessary also to work towards whatever one prays for, and then to learn to wait. You see that what you longed for in the past has finally happened. However, you were harmed because you didn’t have the patience to wait, in which case you would have gained both the one and the other: both the temporal and the eternal ….

So then, there is no point in losing heart, getting upset, complaining. You must close your mouth. Let no one perceive that you are disturbed. Don’t fume with anger, as if to work it out of your system, but rather be calm. Burn the devil through patience and forbearance. The Lord, Who destroys all who speak lies, is my witness that I have greatly benefited by the advice I am giving you. The temptations I had were strong enough to make you think that your soul would depart due to the pain, as if from a flaming furnace. Nevertheless, once the trial is over, so much consolation comes that you feel as if you were in paradise without a body”.