His Beatitude, John X, Patriarch of Antioch and all the East Visits the United Nations, Holds Press Conference

Source: Antiochian Orthodox Christian Archdiocese of North America
Natalya Mihailova | 13 December 2014
On December 10, during his final day in the New York area, His Beatitude, John X, Patriarch of Antioch and all the East, visited the United Nations and held meetings with a variety of officials. 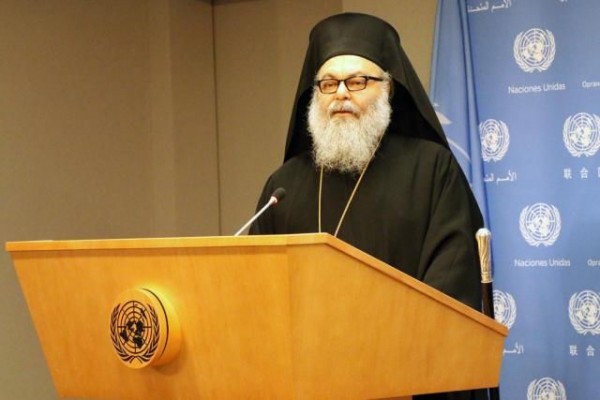 (Watch press conference here.) His first meeting was with the Deputy Secretary General, Mr. Ian Eliasson. During that meeting, as well as the other meetings, His Beatitude stressed that the only solution to the crisis in Syria is one of negotiations and peace, not of bombs and war, saying “The Syrian people ask for peace and welfare for themselves and for everyone on earth.” He continued by saying that “as a Christian leader, I can also speak on behalf of the Islamic leaders in Syria in that we all reject extremism. In Greater Syria we have been co-existing for hundred of years.” He also relayed in his various meetings that with regard to humanitarian relief the Orthodox Church is helping everyone, regardless of sect or religion. He stressed that, as Christians, we do not want to be considered a minority that needs special protection, but that the Christians are all part of the fabric of the society and are equal citizens in every respect. He quoted the Grand Mufti of Syria when the Grand Mufti responded to a question asking “How many Christians are there in Syria?” He replied, “23 million” (the total population of Syria). He was then asked what is the total number of Muslims and he responded in the same way, 23 million. Finally, he stressed that the Christians of Syria, Lebanon, Iraq, Palestine, Jordan and Egypt have their roots there and are part of the land and should not be asked to leave or be evacuated saying that “we were here before Islam and during Islam and have no plans to leave our own land.”

After his meeting with the Deputy Secretary General, he and the delegation met with the UN Ambassador to Chad, His Excellency, Mr. Cherif Mahamat Zene,  who currently holds the post of President of the Security Council. This was followed by a visit to the Syrian Mission to the UN and the Russian Mission to the UN where His Beatitude and the delegation were warmly greeted by UN Ambassador, His Excellency, Mr. Vitaly Churkin. During that particular meeting the Patriarch thanked Russia for their continued support and for exercising their veto in the security council on several occasions in order to protect the integrity and sovereignty of Syria. Both stressed the close relations between Syria and Russia on various levels including the close relations between Patriarch John X and Patriarch Kirill of Moscow and all Russia. The Patriarch assured the ambassador that the great amount of humanitarian relief that has been received from Russia is being distributed to all those in need.

The final stop was back at the United Nations where the Patriarch held a press conference for the international press corps where he touched upon many of the same topics described above. The day ended with a small tour of the United Nations including the Security Council chamber. We are grateful to His Excellency, Dr. Bashar Ja’afari, the Syrian Ambassador to the UN, for organizing and arranging this important trip on the Patriarch’s schedule.