Source: DECR
Natalya Mihailova | 04 December 2014
On 2 December 2014, His Beatitude Tikhon, Archbishop of Washington, Metropolitan of All America and Canada, Primate of the Orthodox Church in America, began his official visit to the Russian Orthodox Church. 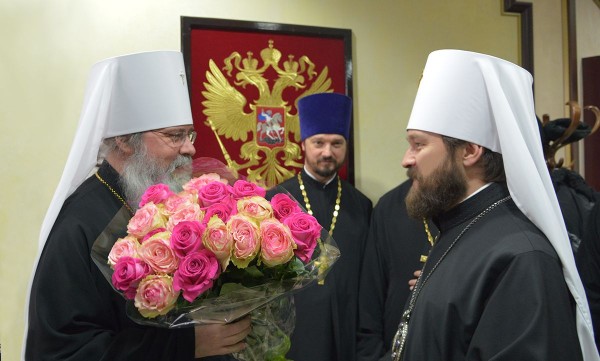 At the Sheremetyevo Airport His Beatitude Metropolitan Tikhon was met by Metropolitan Hilarion of Volokolamsk, chairman of the Moscow Patriarchate’s Department for External Church Relations; Bishop John of Naro-Fominsk, Administrator of the Patriarchal parishes in the USA; archpriest Nikolai Balashov, DECR vice-chairman; Archimandrite Alexander (Pihach), rector of the Moscow Metochion of the Orthodox Church in America – the Church of the Holy Great Martyr Catherine In-the-Fields; archpriest Igor Yakimchuk, DECR secretary for inter-Orthodox relations; and Moscow clergymen.

During the visit, His Beatitude Metropolitan Tikhon of All America and Canada will meet with His Holiness Patriarch Kirill of Moscow and All Russia. The two Primates will celebrate the Divine Liturgy at the Cathedral of the Dormition in the Moscow Kremlin.

At the Donskoy Monastery His Beatitude Tikhon will say a thanksgiving before the holy relics of St Tikhon the Patriarch of All Russia.

His Beatitude Metropolitan Tikhon will visit the Laura of the Holy Trinity and St Sergius and the Stavropegic Convent of the Protecting Veil of the Mother of God, will celebrate the Divine Liturgy at the Church of the Holy Great Martyr Catherine In-the-Fields, and will venerate the shrines of St Petersburg.

On December 10, His Beatitude Tikhon will conclude his visit to the Russian Orthodox Church.