Source: DECR
Natalya Mihailova | 09 December 2014
On 6 December 2014, His Beatitude Metropolitan Tikhon of All America and Canada and members of the delegation accompanying him on his irenical visit to the Russian Orthodox Church visited the State Tretyakov Gallery and the Church of St Nicholas in Tolmachy. 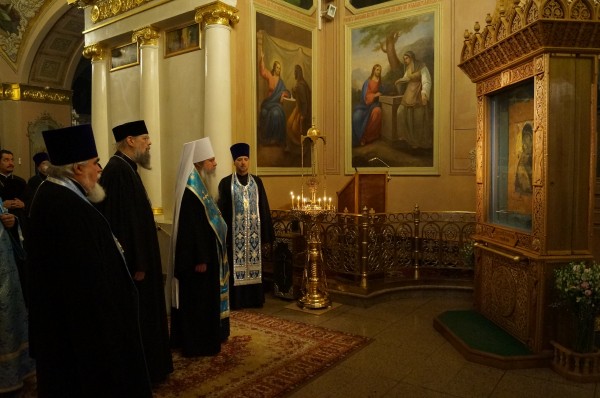 At St Nicholas Church, the Primate of the Orthodox Church in America was met by its rector, archpriest Nikolai Sokolov, clerics, and parishioners.

His Beatitude said a thanksgiving before the miracle-working Vladimir Icon of the Mother of God. After the thanksgiving His Beatitude Metropolitan Tikhon and the members of the delegation of the Orthodox Church in America venerated the shrine.

The rector of St Nicholas Church addressed the distinguished guest with words of greeting and presented him with a copy of the Vladimir Icon of the Heavenly Queen. 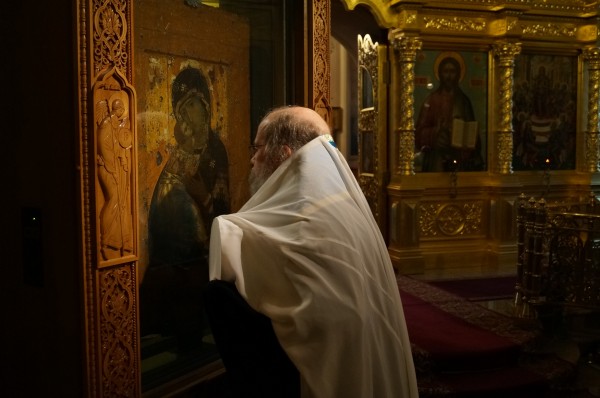 The Primate of the Orthodox Church in America noted that it was a great joy and honour for him to visit the Tretyakov Gallery and St Nicholas Church, to venerate the great shrines of the Russian land, such as the Vladimir icon of the Theotokos and the Icon of the Holy Trinity by St Andrew (Rublev), and to see some other treasures of the Russian art.

Archpriest Nikolai Sokolov showed the high guest around the church and told him about other shrines of St Nicholas Church, such as “The Merciful” Icon of the Mother of God and a cross from the Cathedral of the Dormition in the town of Dmitrov.

Most viewed articles
Hallowed Be Your Name: Some Grammar and A Reflection209
Who Is the Author of Confusion and Fear?173
Church Dating 1,600 Years Back Discovered in Turkey’s Priene Ancient City157
How to Read the Bible99
Seven-day celebrations dedicated to the Saint who helped Bucharest during plague epidemic begin on Thursday80
Holy Intercession Church in Glen Cove, NY, Celebrates its 70th Anniversary69
Patriarch Kirill Encourages the Media to Report Proper and Adequate Information about the Church60
Since the Start of the Pandemic Moscow Priests Have Made Over 4,000 Visits to Patients with COVID-1941
Words from St. Isaac of Syria1
Most popular authors
Archpriest Michael Gillis209
Fr. Stephen Powley173
Pravmir.com team170
Dilan Pamuk157
Archpriest Lawrence Farley99
Aurelian Iftimiu80
Archpriest Stephen Freeman1