On 29th 2014, Russian Minister of Foreign Relations, Sergei Lavrov, met with His Beatitude Patriarch John X of Antioch and All the East currently on the official visit to the Russian Orthodox Church. 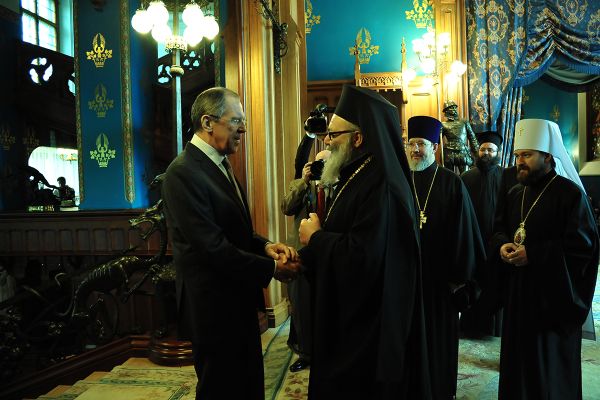 Minister Lavrov underscored a special historical value of the centuries-long relations between the Orthodox Church of Antioch and Russia. These relations are conducive for maintaining traditional accord, which is indispensable in the world and in the Middle East and Northern Africa. Mikhail of Kiev, the first Metropolitan of Rus’, came from Syria, he added.

Traditional interaction and friendly fraternal relations are in demand now as never before, as the events of the Arab Spring ‘affect the fate of Christians who lived in peace and accord with all their neighbours for two thousand years.

‘Today friendship between Orthodox and other Christians, Muslims and followers of other religions is undergoing a serious test. That is why our dialogue is very important for the prevention of a worse scenario,’ the minister said.

He expressed his regret over the abduction of Metropolitans Paul (Yazigi) of Aleppo and Mar Gregorious Yohanna Ibrahim of the Syriac Orthodox Church and assured Patriarch John X that the Russian Ministry of Foreign Affairs exerted maximum efforts in order that they are found and released.

His Beatitude Patriarch John X expressed gratitude to Russia for its position on the events in the Middle East and also to the Russian people for humanitarian aid. Patriarch John underscored that the Antiochian Patriarchate distributed this aid among people in Syria irrespective of their religious belief.