After this there was a feast of the Jews, and Jesus went up to Jerusalem. Now there is at Jerusalem by the sheep market a pool, which is called in the Hebrew tongue Bethesda, having five porches. In these lay a great multitude of impotent folk, of blind, halt, withered, waiting for the moving of the water. For an angel went down at a certain season into the pool, and troubled the water: whosever then first after the troubling of the water stepped in was made whole of whatsoever disease he had. And a certain man was there, which had an infirmity thirty and eight years. When Jesus saw him lie, and knew that he had been now a long time in that case, He saith unto him, Wilt thou be made whole? The impotent man answered Him, Sir, I have no man, when the water is troubled, to put me into the pool: but while I am coming, another steppeth before me. Jesus saith unto him, Rise, take up thy bed, and walk. And immediately the man was made whole, and took up his bed, and walked: and on the same day was the sabbath. The Jews therefore said unto him that was cured, It is the sabbath day, it is not lawful for thee to carry thy bed. He answered them, He that made me whole, the same said unto me, Take up thy bed, and walk. Then asked they him, What man is that which said unto thee, Take up thy bed, and walk? And he that was healed wist not who it was: for Jesus had conveyed Himself away, a multitude being in that place. Afterward Jesus findeth him in the temple, and said unto him, Behold, thou art made whole: sin no more, lest a worse thing come unto thee. The man departed, and told the Jews that it was Jesus, Which had made him whole (John 5:1-15). 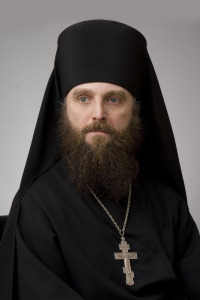 Brothers and sisters, Christ is Risen!

Today at the Divine Liturgy we heard the Gospel narrative of the healing of the paralytic in Jerusalem, a deeply symbolic narrative, each detail of which can impart more than one saving truth.

First of all, the miraculous pool in Jerusalem is a distant prototype of our Christian Baptism, in which we are immersed in the Name of the Father, and of the Son, and of the Holy Spirit, being healed from sins according to our faith or that of our sponsors. While an angel of the Lord descended into the pool in Jerusalem only from time to time, healing a single person, the Life-Giving Lord Himself, the Holy Spirit, descends into the baptismal font, sanctifying the water and granting to all who are baptized the remission of sins and the grace that renews and quickens our nature. Without this grace, we would have been forever cut off from the face of God, since God – Who is pure Spirit – abhors every sinful impurity.

The Lord’s healing of the paralytic represents all of humanity, which had been in spiritual infirmity for thousands of years. Before the Savior’s coming into the world, nothing could heal man from sin and death: neither pagan wisdom, nor the true knowledge of God and piety preserved by the chosen Jewish people. In the words of Holy Scripture, all have sinned, and come short of the glory of God (Romans 3:23). The paralytic at the pool by the sheep market had no man (John 5:7) who could put him in the saving water; thus, the human race, paralyzed by sin before Christ’s coming, did not have this Man (John 18:17), the New Adam, the Heavenly Man (1 Corinthians 15:45,48), the only true Physician of soul and body.

One can pay attention to the fact that the unfortunate paralytic suffered for thirty-eight years – that is, almost forty years – and that the number “forty” in Holy Scripture indicates fullness and perfection. It was precisely when the fulness of the time was come, that God sent forth His Son, made of a woman, made under the law, to redeem them that were under the law, that we might receive the adoption of sons (Galatians 4:4-5). The miraculous pool by the sheep market where lay a great multitude of impotent folk, of blind, halt, withered (John 5:3) was called “Bethesda,” which translated from the Hebrew means “house of mercy.” One can see here a prefiguring of the New Testament Church of Christ, that true “house of mercy,” where the saving and sanctifying grace of the Holy Spirit acts among the new people of God. Finally, the Savior’s words to the man he healed – Behold, thou art made whole: sin no more (John 5:14) – reveal that sin is the sole cause of our sicknesses.

But for all the rich significance of this Gospel narrative, today’s liturgical services – of the fourth Sunday of Pascha – offer us one particular thought. In the kontakion we hear: “As of old Thou didst raise up the paralytic, O Lord God, by Thy God-like care and might, raise up my soul which is palsied by diverse sins and transgressions and by unseemly deeds and acts.” That is, the Holy Church likens us to the paralytic and encourages us to ask the Lord for deliverance from a kind of terrible spiritual malady. For although we have already received remission of sins and the grace of adoption in the Mystery of Confession, we nonetheless abide by and large in paralysis and deadness of spirit. 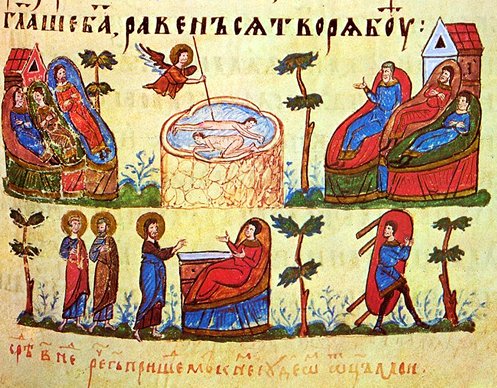 All who are being saved knows this sickness: it leads to the loss of vital connection with God and seems to render fruitless entire months and years of our life. Its symptoms follow us about relentlessly: indifference to our salvation, cowardice and lack of faith, inattentive and cold prayer, and hostility towards people and murmuring against God. A sober view of ourselves and of our spiritual condition could lead us to a state of woeful bewilderment and hopelessness ­– but, of course, this is not what the Church expects of us. We resemble the paralytic in Jerusalem in our spiritual condition: we are incapable of any virtue and of even moving a single finger in the spiritual life – but the Almighty Lord can heal us immediately by a single word.

Everything in the spiritual life takes place by God’s grace. His divine power, in the words of Holy Scripture, hath given unto us all things that pertain unto life and godliness (2 Peter 1:3). The very thought of salvation, the very zeal for salvation, comes not from us, but from Him that calleth (Romans 9:12). All that depends on us is whether we accept this thought, whether we maintain this zeal, and whether we have sufficient faith and humble trust. But this little bit happens to require the ascetic struggle and labor of an entire lifetime. According to St. John Chrysostom, virtue acquired without labor is of no benefit to us; without afflictions and sicknesses we become corrupted. The saint suggests that we learn from the Jerusalem paralytic’s exceptional patience. After all, for thirty-eight years – nearly his entire life! – he did not stray from the miraculous pool. He did not receive healing, yet he did not lose heart or fall into despair. Christ asked him: Wilt thou be made whole? He replied meekly and humbly: Sir, I have no man, when the water is troubled, to put me into the pool (John 5:6-7). Long years of suffering had led him to a state of genuine and heartfelt contrition, the only true basis for every virtue.

Brothers and sisters: let us, too, persistently and patiently strengthen our spirit by saving faith, by care for salvation, and by active love for our neighbors, compelling ourselves to give thanks to God for our very infirmity, for it leads us to the saving awareness of our unfitness and to place our living hope in the Savior! We need to work on ourselves; we need to “massage” our deadened soul like we would a numb part of our body. We know the necessary means: prayer and the reading of Holy Scripture, seeing our transgressions and not judging those of others, attending God’s church, and Confession and Communion. Throughout, however, let us hope not in ourselves, but on the Lord. In our labors it befits us to become like the paralytic, who remained unwaveringly next to the miraculous pool and patiently awaited his Savior, Who with a single word heals the sick and raises the dead, Who does not put the broken soul to shame and is not slow to grant it grace-filled amendment and the power to live according to His commandments.

Delivered on April 25, 2010, in the Protection Church of the Moscow Theological Academy.