The Paralytic and the Pool

Source: OCA
In early tradition, Pascha meant baptism and baptism always had a paschal feel to it. The two were inextricably linked.
Archpriest Lawrence Farley | 12 May 2014 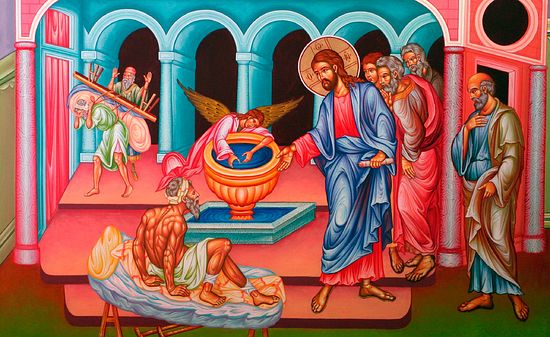 One wonders sometimes about why the Gospel story of the healing of the paralytic was chosen for the Paschal season.  One understands why the stories of Thomas and the Myrrh-bearers were chosen, but the paralytic?  Perhaps our incomprehension is rooted in our modern separation of Pascha from baptism.  In the early Church from at least the time of Tertullian (d. 220), Pascha was considered as the time for baptism, and the spectacle of many catechumens lining up to be baptized in the baptistery (a separate building in those days) and then processing with solemn joy into the church to be anointed with laying on of hands by the bishop forged an indelible link in people’s minds between Pascha and baptism.  Even now in our Pascha-night Liturgy, in place of the Trisagion hymn we sing “As many as have been baptized into Christ.”  In early tradition, Pascha meant baptism and baptism always had a paschal feel to it.  The two were inextricably linked.

That might explain why all the Sunday Gospels in the Paschal season after the Sunday of the Myrrh-bearers focus upon water:  the Samaritan woman finds Christ by the well, and the blind man finds salvation as he washes in the pool of Siloam.  Similarly, the paralytic encounters Christ as he sat by the waters of Bethesda.  In all these Gospels, we find water, a clear echo of baptism for those to whom baptism was linked with Pascha.  As early as Tertullian (in his bookOn Baptism, chapter 5), the presumed descent of the angel into the Bethesda pool foreshadowed the spiritual and transformative power of Christian baptism.

As we examine the story of the paralytic in greater depth, it is important to see that in its original context the Bethesda pool was not a source of salvation for the paralytic, but a rival alternative to it, if not its positive impediment.  Remember the details of the story:  the paralytic sat languishing by the pool, thirty-eight years in his wretched condition, hoping for healing.  When the pool’s waters were stirred (by an angel, as everyone thought), he hoped to be the first one into the pool to soak up the angel’s divine power and be cured, but being paralyzed, he was too slow, and someone always beat him to the pool.  So, he waited and waited, hoping to find salvation one day in the pool.

It was there that Jesus found him.  When Jesus asked him, “Do you want to be healed?” (John 5:6), he didn’t say, “Yes Lord, please heal me!”  He was still hoping to get into the pool, and he answered, “Sir, I have no man to put me into the pool when the water is troubled, and while I am going another steps down before me.”  But salvation wasn’t in the pool.  It was in Jesus.  Jesus simply said, “Rise, take your pallet, and walk,” and the man did.  He didn’t need the pool after all.  All he needed was Jesus.

In John’s subtext, the pool functions as an image of the Law and the man as an image of Israel hoping to find salvation in the Law.  The paralytic had been long in his condition, even as Israel had long been waiting for divine salvation.  The Bethesda pool was thought to have been stirred by an angel, even as the Law had been given by angels (Acts 7:53).  The pool even had five porticoes (John 5:4), even as the Mosaic Law had five books—a detail noticed by Saint Augustine.  Like the paralytic who had to stop relying on the pool for salvation and turn instead to Christ, so Israel had to stop relying upon the Law to save them, and also turn to Christ.  The old was giving place to the new.

We see this contrast between the old and the new throughout John’s Gospel:  not Jewish water, but Christ’s wine, not the old Temple, but Christ’s body, not the manna in the wilderness, but Christ’s flesh.  Christian faith involved turning from the old ways to the new, as sacred Jewish history veered upward into the Kingdom and the eschaton.  It was as Isaiah foretold long ago:  “Remember not the former things, nor consider the things of old.  Behold, I am doing a new thing; now it springs forth, do you know perceive it?” (Isaiah 43:18-19).  This is the newness of Pascha, and the new life given to us in baptism.  The paralytic found this life not in the old pool, but in the living Christ.  Our Paschal season reminds us that this is where we find new life and constant renewal as well. 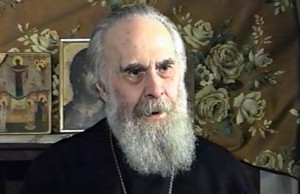 Let Us Look at Each Other…
Metropolitan Anthony of Sourozh

So we are surrounded, all of us, by people who are in the situation of this…