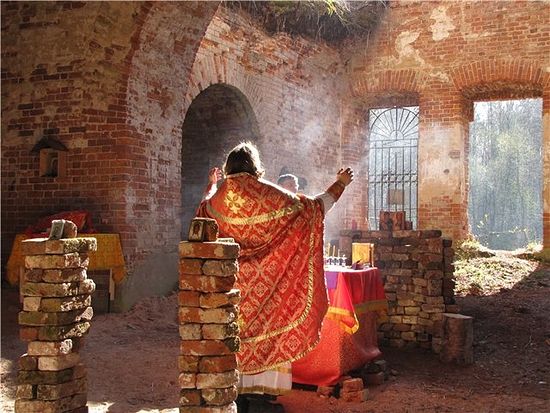 In the Epistle to the Galatian church (Gal. 1:11-19), we hear St. Paul’s discussing the validity of his conversion and Apostleship.  We know from the book of Acts that he was not a typical convert from Judaism to Christianity.  His conversion was more significant and complete than simply exchanging a synagogue for a church.  It took an encounter with Christ on the road to Damascus (Acts 9:1-6) to change St. Paul from a persecutor of the Christian faith to one of Christ’s greatest disciples, responsible for spreading the Gospel message throughout the far reaches of the Roman Empire.

Like many of us who converted to Orthodox Christianity from another religious tradition, St. Paul ran into those who had doubts about the validity of his conversion.  Think back to the time you told your family and friends that you were joining the Orthodox Christian Church: What was their reaction?  Was it complete acceptance, total skepticism or something in between?  Proving the strength of your conversion was probably even harder if you came from no “religious” background at all.  To go from a man or woman of the world to a true follower of Christ is quite a change in one’s life, involving more than just getting up early on Sundays.  It requires not only going to church but loving the church.  It requires a total change in the way we order our lives and priorities.  It might even mean having to cease certain activities or friends that conflict with our new-found faith, while also resisting the pull of our previous life.

And what about your new-found church family?  How might we expect them to react?  If you had spent your life not just denying but persecuting the Church and its people, it would only make sense that they would be suspicious of your dramatic change in attitude.  We recall from the Acts of the Apostles that it was same Paul (then known as Saul of Tarsus) who as a young man approved of the stoning of St. Stephen, the first holy martyr of the Church (Acts 7:58-8:1).  Furthermore, it was while on the road to Damascus to persecute the Christians in the city that Saul was struck blind and had his life-changing encounter with Christ.

In order to establish his bona fides, St. Paul confesses his sins he committed against the early Church.  Notice how he describes his actions, how he “persecuted the church of God beyond measure and tried to destroy it” (Gal. 11:13).  While many of us may not have been on friendly terms with the Christian people before our conversion, it would be hard to truly say that you went to the same extreme measures to eradicate the Church and its followers.  But here we see a man who made it his life’s mission to ensure this fledgling belief never took hold within the Jewish communities.

It is interesting to consider the chain of events that caused the paths of St. Stephen and Saul of Tarsus to cross on that fateful day in first century Jerusalem.  The Acts of the Apostles tells us that St. Stephen was one of the seven original deacons chosen by the apostles to assist with the care and feeding of the widows within the church community (Acts 6:3,4).  The account in Acts tells us that St. Stephen was “full of grace and power” and “did great wonders and signs among the people” (v. 8).  As a result of his holiness and dedication to the Church, St. Stephen came to the attention of the Jewish religious leaders, who ended up falsely accusing him of blasphemy against Moses and God (v. 11).  St. Stephen was taken before the council where he delivered one of the most powerful spoken witness of the glory of God, recounting the history of Israel from the time of Abraham, God’s deliverance through Moses and ending with the crucifixion of Christ.  St. Stephen pointed out that during all those years the people of Israel rebelled against both God and His prophets, failing to keep “the law as ordained by angels” preferring instead to persecute the prophets and oppose the Holy Spirit.

As we all know, St. Stephen did not win any converts to Christianity on that day.  Even though he told the truth and boldly proclaimed his faith in Christ, he still lost his life for the sake of the Gospel.  If we look at the missionary work of St. Paul, we see that he, too, often ran into opposition to the Gospel message.  St. Paul will recount in his second letter to the church in Corinth of the trials and tribulations he encountered on his missionary journeys:

How much have we had to suffer for the Gospel?  I am sure most of us have never had to endure the amount of physical pain and danger that St. Paul had suffered.  And yet his credentials as an Apostle was challenged by his co-workers in the faith.  As St. Paul wrote to the Galatians, he was not preaching a Gospel that was handed to him by man but through revelation of Jesus Christ (Gal. 1:11).  Without that revelation—the revealing of something that extends and expands beyond this world—he could not endure and overcome the challenges he faced.

Without the revelation we receive from the Holy Spirit, we too will not prevail.  Our beliefs are defined and strengthened by the depth of the relationship we have with Christ.  As we see from the lives of both St. Stephen and St. Paul, without divine revelation we cannot stand strong against the ever-rising tide of secularism that continues to take control of the world.  We will be like the house that is build on sand, that is washed away when the water-level rises.  Only those strong in their faith will be like the wise man who builds his house on solid rock (Matt. 7:24-27).  Jesus tells us this solid foundation is built on hearing and obeying His teachings.  When we allow ourselves to be led by the Holy Spirit then we will see Christ revealed in our lives as well as in the lives of those around us.

The Nativity Season is a time of self-reflection and personal discovery.  What does it mean that “God is with us?”  What has Christ revealed to each of us this past year: Is our faith strengthened or was it weakened?  Can we consider ourselves to be the young Saul of Tarsus, persecuting the Christian faith or the “new man,” St. Paul the Apostle, willing to suffer for the Gospel of Christ?  Are we willing to die for our faith like St. Stephen?  For our conversion to be complete we must be willing to seek God in everything, everywhere and at all times.  What we seek, we will find (Luke 11:9).  This is how Christ reveals Himself to us and gives us the strength to boldly persevere in the face of opposition, so we can gain the strength needed for our Christian journey by drawing on the faith of those men and women who did the suffering for us, like the martyred Saints Stephen and Paul.