For it is dreadful to be abandoned by neighbors and friends, but it is even more dreadful to think that God has left you, when an insuperable wall has been raised between you and God, and He seems neither to hear, nor see, nor notice you.
Metropolitan Hilarion (Alfeyev) | 31 March 2010 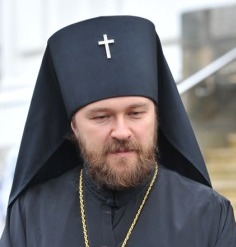 During the last days of His earthly life, the Lord was abandoned in the face of His tormentors, in the face of suffering and death. He drained to the dregs the cup that was prepared for Him, and experienced the most dreadful thing ever suffered by man – loneliness and abandonment.

Jesus cried out to His Father on the cross: “My God, My God, why hast Thou forsaken Me?” (Mt. 27:46). This cry bore the pain of all humanity and of every person – the pain of everyone who feels lonely and abandoned by God.

For it is dreadful to be abandoned by neighbors and friends, but it is even more dreadful to think that God has left you, when an insuperable wall has been raised between you and God, and He seems neither to hear, nor see, nor notice you.

If you suffer from loneliness, remember how lonely the Savior was during the last days of His life.

If your neighbors or your disciples have turned their backs on you, if you are subjected to unrighteous slander, if they call you a heretic and a destroyer of paternal traditions, if they bear false witness against you and pronounce you worthy of death, remember that the Lord Himself underwent this.

If the one who lived under the same roof with you, took Communion from the same chalice, ate your bread, the one whom you trusted with all the power of love, with whom you shared your thoughts and feelings, from whom you concealed nothing and for whom you spared nothing — if this man betrayed you, turned his back on you, “raised his heel to smite you,” and spat on you, remember that the Lord endured all that.

If your cross is too heavy for you to bear, and if your neighbors do not want to share it with you, be grateful even to a chance passer-by who would help you bear it at least a part of the way.

If the wave of God-forsakenness has covered you entirely, and it seems to you that there is no God, that He has turned His back on you or does not hear you, do not despair, for Christ underwent this experience, dreadful and bitter.

If you are judged and blasphemed, struck on the face and spat upon, nailed to the cross and given bitter gall instead of water, pray for those who crucify you, for “they know not what they do.”

Venerating the holy tomb of Jesus with fear and trembling, in silence and with piety, let us praise the Lord that He became lonely that we might not be lonely; that He was abandoned that we might not be abandoned; that He went through insults and mockery, slander and humiliation, sufferings and death so that in each suffering of ours, we might feel that we are not alone but that the Savior Himself is with us “unto the end of the ages.” Amen.