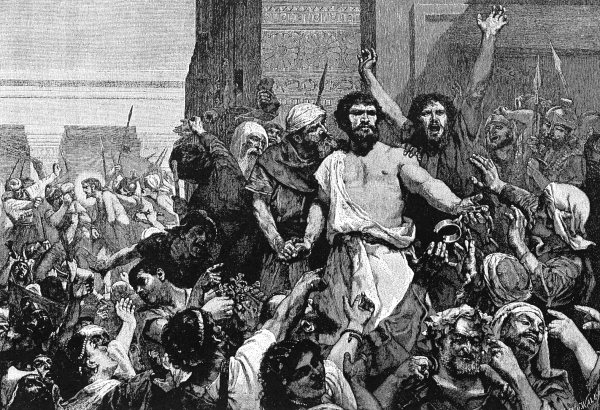 And they cried out all at once, saying, Away with this man, and release unto us Barabbas (who for a certain sedition made in the city, and for murder, was cast into prison).

On the eve of Western Easter, our nation’s newspaper of record — the New York Times — published a brief interview with a Protestant minister, the president of the Union Theological Seminary. Unfortunately (albeit not unpredictably), this minister proceeded in short order to mock the Virgin Birth (while naming it as a tool in the oppression of women), to deny the existence of hell, to doubt the existence of the afterlife in general, to dismiss the efficacy of prayer as a futile attempt to “manipulate God,” to assert that God is not omniscient and all-powerful anyway, and finally to dismiss the Resurrection of Christ as the “obsession” of those Christians who have “a pretty wobbly faith” (!).

To be fair, she does mention some truth as well: the transcendence of God, the centrality of mystery, the importance of love. But at the end of the interview, she makes a claim that is extraordinarily telling:

Christianity is at something of a turning point, but I think that this questioning and this reaching is even bigger than Christianity. It reaches into many religious traditions. This wrestling with climate change, and wrestling with the levels of violence in our world, wrestling with authoritarianism and the intractable character of gender oppression — it’s forcing communities within all religions to say, “Something is horribly wrong here.” It’s a spiritual crisis. Many nonreligious people feel it, too. We need a new way entirely to think about what it means to be a human being and what the purpose of our lives is. For me, this moment feels apocalyptic, as if something new is struggling to be born… Today I feel that spiritual ground around us shaking again. The structures of religion as we know it have come up bankrupt and are collapsing. What will emerge?

Reading these words, I could not help but recall the chilling, horrific poem by W.B. Yeats, “The Second Coming.” For those who are not familiar with this poem, here it is in its entirety:

Turning and turning in the widening gyre
The falcon cannot hear the falconer;
Things fall apart; the centre cannot hold;
Mere anarchy is loosed upon the world,
The blood-dimmed tide is loosed, and everywhere
The ceremony of innocence is drowned;
The best lack all conviction, while the worst
Are full of passionate intensity.

Surely some revelation is at hand;
Surely the Second Coming is at hand.

The Second Coming! Hardly are those words out
When a vast image out of Spiritus Mundi
Troubles my sight: somewhere in sands of the desert
A shape with lion body and the head of a man,
A gaze blank and pitiless as the sun,
Is moving its slow thighs, while all about it
Reel shadows of the indignant desert birds.
The darkness drops again; but now I know
That twenty centuries of stony sleep
Were vexed to nightmare by a rocking cradle,
And what rough beast, its hour come round at last,
Slouches towards Bethlehem to be born?

The poem is called “The Second Coming,” but it is obviously about the coming of the Antichrist. And the echoes of this poem are, unfortunately, all too strong in the words of this Protestant minister — she speaks of a questioning and reaching “even bigger than Christianity,” of a “spiritual crisis” (defined, one will note, by totally external concerns) that demands “a new way entirely to think about what it means to be a human being and what the purpose of our lives is.” And most telling of all — she is practically quoting Yeats verbatim here — “this moment feels apocalyptic, as if something new is struggling to be born.”

In the apocalypse she envisions, we look for “something new” — rather than Jesus Christ, the same yesterday and today and forever, “struggling to be born” — rather than awaiting His glorious return.

It is no accident that during Vespers for Great and Holy Tuesday, we hear these words from the Gospel of St. Matthew:

And as he sat upon the mount of Olives, the disciples came unto him privately, saying, Tell us, when shall these things be? and what shall be the sign of thy coming, and of the end of the world?

The great troparion of the first days of Holy Week — “Behold, the Bridegroom cometh in the middle of the night” — calls us all to a ceaseless vigilance and a watchful repentance. And as we, the Christians of the last days, prepare ourselves to meet Pascha and await the return of our Lord, we must take great heed not to be deceived. We must not allow ourselves to be seduced by the Spiritus Mundi, that “rough beast, its hour come round at last.” And make no mistake: its hour has indeed arrived, and the voices of its false prophets sound even from the pages of the New York Times.

Christ’s warning to His disciples during that first Holy Week came none too soon, for the first Antichrist of all was Barabbas — even his name is translated as “son of the father.” And sure enough, the religious leaders of that day lost no time in persuading the people of Israel to beg for Barabbas in place of the true Christ, convincing them that this worldly revolutionary could solve all their problems and take away all their woes. Yet only a few short years later, Jerusalem was razed to the ground.

Barrabas will not save us.

Many spirits are abroad in the world, and the credentials they display are splendid gifts of mind, learning, and of talent. Christian, look carefully. Ask for the print of the nails.