On the Sinners in the Gospels, and Other Sinners

Who, these days, has the ability to whisper the Publican’s humble prayer? We all consider ourselves to be "successful" Publicans and view all our neighbors as Pharisees. We do not repent as Peter did nor do we give "half of our goods" to the poor as Zaccheus did after a simple glance from Jesus.
Archbishop John (Shahovskoy) | 09 March 2010 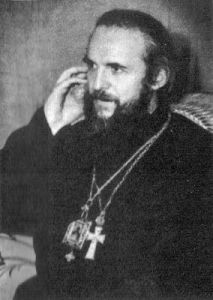 When one looks upon the Gospel’s sinners, listens to them and sees their behavior, one unavoidably thinks, how good these sinners were basically compared to us and to the people of our time. Here is a crowd, enraged by a violation of a Divine commandment, approaching the Savior. It is dragging a woman “taken in adultery,” and is ready to stone her. How reverently this crowd hears the wise and succinct response of the Savior to their question and how each of their consciences is directly moved by it. Is such a thing possible today? Overcome by the inner judgement of their conscience, these sinners go their own way. Could such a thing happen today? In the first place it is difficult to imagine that people today would be so upset, both religiously and sincerely, by the very idea of adultery. Such a sin today is celebrated, exalted in popular literature, plays and cinema. This is a subject of numerous repetitions, vainglory and special heroics. Would it be possible to see the manifestation of such a religious response to the sin that moved that Hebrew and pagan crowd in Jerusalem? One cannot imagine how people in whatever current social milieu, could express such fervent outrage towards a violation of Divine law and then experience such a profound shame on hearing the calm and meek words of the Divine Teacher. See how all of them begin to leave, prodded by their own consciences. Not too many social critics of their neighbor could project such moral sensitivity today.

And the Gospel’s sinful Prodigal Son. How he stirs our consciousness with his subtle and profound repentance. What an incredible soul, in the humility of its feelings: “Father, I am not worthy to be Your son, accept me as one of Your hired hands.”

We also see those great Evangelical criminals, Ananias and Sapphira, who lied to the Holy Spirit. Suddenly dying, because they held back the proceeds from some of the goods that they voluntarily offered to God. Are they not innocent babes compared to the spiritual hypocrites of our times? How many Christians and even pastors today promise to give up their whole lives to the Lord God but give up only an insignificant part, holding back the rest for their own selfish needs.

And the Publicans, contemporary with our Lord Jesus Christ, those tax gatherers, those first-century corrupt officials so despised by the Palestinian people, are they not innocent babes compared to many officials of our days, in all lands and among all nations of the world?

Even the classical, frequently remembered Barabbas the robber, freed by Pilate instead of Christ, and who without doubt would kill someone on the way — how can we compare his crime with the methodical and consciously merciless destruction in our days of millions of innocent victims, with their wives and children “for the good of the State”?

The Gospel teaches us not only through its righteous ones. It also leads us to repentance, towards God, through the images of its sinners, their humanity, their sensitivity towards the good. Here, they are carrying the costly alabaster jar with precious ointment and shatter it in order to anoint the Savior’s body. Here they weep bitterly after their renunciation. Here they stop on the road, as did Saul, blinded by the heavenly vision. All these things change their lives or, judging themselves upon their own cross, they beg the Lord to have mercy upon them.

Where is our ointment? Where are our tears? Where is the perception of our conscience in exposing ourselves? We see none of this. We follow our own plans, projects, feelings, passions, and we overlook Christ’s gentle Truth that loves us. We have gone far astray not only from the Gospel but even from the Gospel’s sinners!

The Lord has given His Word great power. The ancient sinners amaze us with their humanity, their humility, which shines through their sins.

The Lord meant to enlighten us and comfort us with images of these sinners, void of our tendencies of self-satisfaction and self-admiration. Even we can become like those very human sinners if we find it impossible to love God. Perhaps the Lord wanted to bring us to tears, even bitter tears, when we compare our feelings with the experiences of those sinners in the Gospels. We can see very clearly what those sinners in the Gospel were like and what we – oh so civilized! – really are.

Praising himself in Jerusalem’s temple, the ancient Pharisee is but a child when compared to the blatant and the veiled examples of self-aggrandizement of the numerous social, political and yes, even ecclesiastical personages in our times.

Evangelical sinfulness is merely the sound of a “shepherd’s flute” compared to the importune, deafening and shameless symphony of sins of our times. Today people rise up against God’s Spirit not just individually but collectively. What is white is so insistently pushed in this world, but that which is white is really black. “Let the mountains fall upon us and let the hills cover us”!

Who, these days, has the ability to whisper the Publican’s humble prayer? We all consider ourselves to be “successful” Publicans and view all our neighbors as Pharisees. We do not repent as Peter did nor do we give “half of our goods” to the poor as Zaccheus did after a simple glance from Jesus. If we could only forget the oil as did the foolish virgins. Or just bury the Talent into the sad ground, having accomplished nothing sinful with it. If only, even ignoring Truth itself, we could simply busy ourselves with our family activities or peacefully put our oxen to work. . . But, no. We participate in those iniquities, which come into the world under the guise of a special concern for people and nations.

Even the Gospel’s greatest sinner, Judas, in his despair, saw his sin. And even if his repentance before God was not all that sincere, he still threw away his crime-stained money, the thirty pieces of silver, the price of his betrayal and, tormented by his conscience cried: “I betrayed innocent blood.” And is it not so, in our days, that the wellbeing of people and nations is built upon the innocent suffering of many?

Considering the sinfulness revealed to us in the Gospel and considering how we all live, can we not but be aware that the Last Judgement is already standing before the gates of the world?

Illuminating us with the righteousness of its righteous ones, the Gospel also teaches us by the examples of its sinners, so that we might place all our hope upon the Truth of Christ and not on our own righteousness. And through the Lord’s mercy, enter into that Truth.

Spiritual Heritage of the Russian Emigration

Translated from the Russian by A.S.