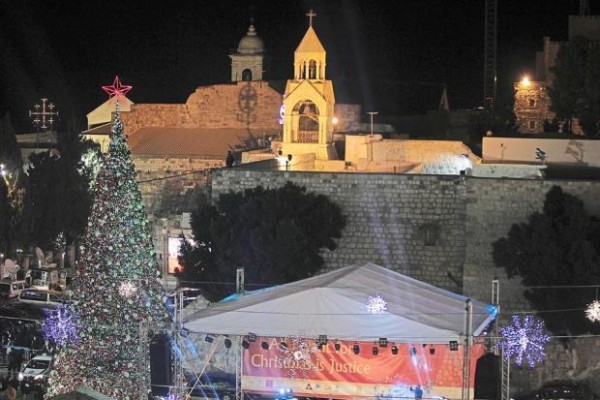 Holy land: A view of Manger Square and the Church of the Nativity as people gather for Christmas eve celebrations in the biblical West Bank city of Bethlehem, believed to be the birthplace of Jesus Christ. — AFP

The Greek Orthodox Patriarch of Jerusalem Theophilus III arrived Tuesday at Manager Square, marking the start of Christmas Eve celebrations according to the Julian calendar.

Theophilus III was welcomed by the Orthodox priests and parishioners from Bethlehem, Beit Jala and Beit Sahour at the Tomb of Rachel, also known as the Bilal bin Rabah mosque, before making his way to Manager Square, where he was greeted by Bethlehem Governor Jebrin al-Bakri, Minister of Tourism Rula Ma’aya, Bethlehem Mayor Vera Baboun and Presidential Advisor for Christian Affairs Ziad Bandak.

The Patriarch was also greeted upon his arrival by hundreds of Orthodox locals and pilgrims waiting at Manager Square before making a solemn entry into the Basilica of the Nativity.

The patriarchal convoy took off from Jerusalem and made a stop at St. Elias Monastery before entering Bethlehem through a massive metal gate in the illegal Segregation Wall that splits the twin cities of Bethlehem and Jerusalem.

Commenting on the festive atmosphere, Spokesperson for Greek Orthodox Patriarchate Father Issa Musleh said: “Despite siege and closure, Bethlehem is flooded with Christmas festivities and joy.’

‘May Christmas celebrations provide a favorable opportunity to spread joy among our children who are living harsh conditions as a result of the Israeli occupation,’ he hoped.

President Mahmoud Abbas as well as a representative of King of Jordan Abdullah II are expected to arrive in Bethlehem later to attend the mid night mass that would be presided over by Patriarch Theophilus III.

The Assyrian, Coptic, and Ethiopian churches also celebrate Christmas on January 7 according to the Julian Calendar.

Patriarchs and bishops of the Assyrian, Coptic and Ethiopian churches also arrived at Manager Square to begin the celebration of Orthodox Christmas.

The Syrian Orthodox Archbishop Mar Swerios Malki Murad arrived in the square at around 8am and conveyed a message of peace and love to the world as he made his way to the Nativity Church.

“We would like to send a message of peace, love and freedom for Palestine, wishing everyone comfort and stability. We pray for security and stability and the end of war here in the Holy Land as well as Iraq and Syria,” Murad added.

Later, throngs of believers greeted Coptic Orthodox Archbishop Anba Abraham as he arrived at Manager Square. “May peace prevail in our beloved homeland, Palestine, and the Palestinian people attain their full rights and establish the independent Palestinian state with East Jerusalem as its capital,” Abraham said.

The Church of the Nativity is administered by three churches, the Roman Catholic Church, the Greek Orthodox Church and the Armenian Church. The Orthodox and Oriental churches will celebrate the feast on December 25 according to the Julian Calendar, equivalent to January 7.

Christmas is also celebrated by Orthodox Christians in Russia, Serbia, Georgia, Ukraine and Syria on January 7.

In anticipation of Christmas Eve, police are on high alert and deployed around the city in the main streets and junctions to ensure security. Palestinian Red Crescent paramedics and volunteers will be on standby to help out in case of emergencies.

The Armenian Orthodox Church will celebrate Christmas on January 19.