Biggest in the Central Asia Orthodox church opened in Bishkek 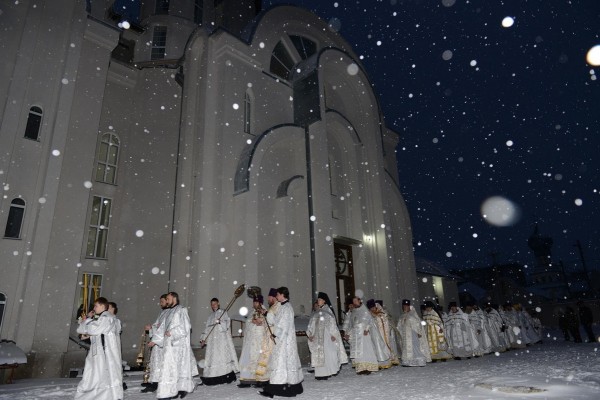 Head of the Central Asian Metropolitan District, Metropolitan Vikenty of Tashkent and Uzbekistan chaired the consecration. Hierarchs from Uzbekistan, Russia, Tajikistan and Turkmenia participated in the ceremony, officials from the presidential and governmental administration and diplomatic missions attended it.

The consecration of the church was timed for the 1000-year commemoration of St. Vladimir – the Baptist of Russia, celebrated by the Russian Orthodox Church this year.

The church can house up to 2,500 people, the height of the cathedral without the cross is 34 meters, the square totals to 1040 square meters.

“As to its architectural design, the cathedral is the most grandiose church building in the republic,” the interviewee of the agency stressed.

The new Orthodox church is located in the south of Bishkek, its building started in the mid-1990s.

Most viewed articles
Life Truly Genuine and Authentic in the Eyes of God107
Patriarch Kirill: “We Should Pray for Our Lord to Strengthen Fraternal Feelings of the Peoples of Holy Rus”90
How to Deal with Sin75
Holy Cincture of the Theotokos to arrive in France next week56
The Authenticity of the Vision of Christ in the Life of Saint Silouan56
The Bulgarian Church Can Canonize Its First Patriarch47
“The models par excellence are the great hesychast saints,” says Romanian Orthodox Bishop of Oradea41
Most popular authors
Pravmir.com team137
Fr. Theodore Stylianopoulos107
Archpriest Basil Ross Aden75
Aurelian Iftimiu56
Archimandrite Zacharias Zacharou55
Ștefana Totorcea41