Source: InSerbia
Natalya Mihailova | 21 July 2014
VIENNA – Bishop Andrej of Austria-Switzerland of the Serbian Orthodox Church (SPC) was enthroned at the Resurrection of Christ Cathedral in Vienna in the presence of political and religious representatives of Serbia and Austria on Sunday. 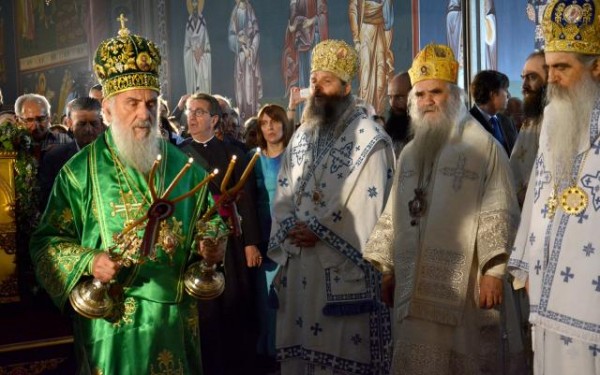 Serbian Patriarch Irinej held a divine liturgy, with assistance of several bishops from the SPC and other churches in the territory of that diocese.

After the enthronement ceremony, Patriarch Irinej said that this is a historic event, noting that several years ago the Holy Assembly of Bishops established a new diocese for Austria, Switzerland, Italy and Malta and elected as its first bishop – Andrej, who previously served as the Bishop of Remesiana.

Serbian Patriarch Irinej noted that a big job lies ahead of Bishop Andrej in his new position- to organize the diocese, church life, draw the Orthodox believers living in this part of Europe closer to the church, and lead them along the path of St Sava, the first Serbian archbishop and enlightener.

He noted that Bishop Andrej’s tasks will also be to foster good relations between the Serb community and the state of Austria and its representatives, and establish close, friendly relations with the Roman Catholic Church and the religious community, and other Orthodox churches and religious communities.

The Diocese of Austria-Switzerland-Italy and Malta was established in 2010, after it was separated from the Diocese of Central Europe. It has around 300,000 believers, and was in the meantime administered by Bishop of Backa Irinej.

The SPC has four churches in Vienna, as it recently got one from the Roman Catholic Church which should now be refurbished for liturgies.