Bishop Chrysostomos of Evripos: “Kingdom of Heaven Is the Most Precious Treasure” 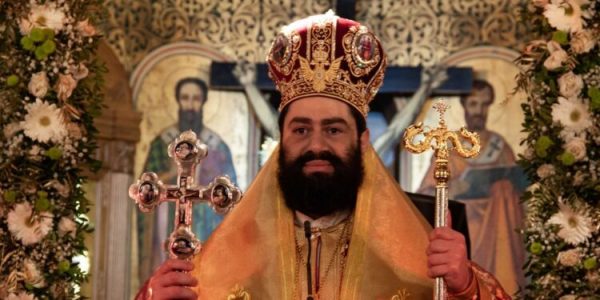 Bishop Chrysostomos of Evripos presided over the Hierarchical Divine Liturgy at the Church of Saint Dionysius the Areopagite in Athens in order to commemorate the Saint, reports the Orthodox Times.

“The kingdom of heaven is the most precious treasure of this world”, stressed Bishop Chrysostomos at the sanctuary, “because it is the entrance of heaven on earth.” “It is the union of the uncreated God and the created man,” he added.

In addition, he referred to the true meaning of the Kingdom of God: “It is not an earthly political system nor a socio-political system but the revelation of God to the man. Christ revealed it when he became a man. He communed and is still commuting it with all of us. He invites us to the Kingdom of love, meekness and justice. He invites us to receive, share and enjoy communion because God wants all human beings to be saved and to come unto the knowledge of the truth,” he said.

Finally, he referred to the martyrdom of the saints of our Church: “Our saints died neither due to an ideology nor due to a philosophical theory. They communicated with Christ, who enlightened them and informed them that death did not exist,” he added.