Metropolitan Onuphry: It Is Not “Supermen”, Who Become Saints, But People Who Overcome Their Weaknesses 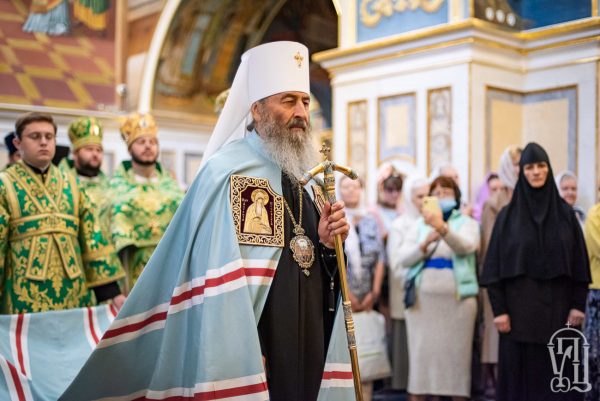 The Holy Fathers were not ‘supermen’. They had patience, which helps one to learn more about oneself, to struggle internally and to strive for perfection, said His Beatitude Metropolitan Onuphry, Primate of the Ukrainian Orthodox Church, in his sermon during the Divine Liturgy at the Dormition Cathedral of the Kiev-Pechersk Lavra on September 10, 2020, reports the Information and Education Department of the UOC.

“They [venerable saints of the Kiev-Pechersk Lavra] were like us, they were not some kind of “supermen”, but they had the same soul. But patience makes one wise. Patience helps a person to correctly understand the situation in which they find themselves, both the external and internal one. When a novice comes to a monastery, he begins to understand himself under the guidance of a spiritual father: he sorts out his heart, separating the good from the bad,” said the Primate of the Ukrainian Orthodox Church.

According to the Archpastor, everyone should wage a constant struggle within themselves and strive to correct themselves through repentance and prayer. It is in this struggle that man realizes the omnipotence of God and his own weakness.

“We think that we are powerful and strong, but any passion will defeat us if God does not help us. We can defeat something or someone only with God’s power. When we realize that God is everything, and we are nothing, that I can do everything – I can live, I can do good, I can overcome sins and shortcomings – only with God’s power, then we realize that God is everything for us. This awareness of one’s insignificance and God’s omnipotence is the first step, which is spiritual poverty and on which everything is based,” stressed His Beatitude Metropolitan Onuphry.

Before reaching such spiritual development, it is necessary to carefully struggle with oneself and endure a lot, the Archpastor noted. Without this, it is impossible to achieve the highest and best things.

“Without building the first floor, the second floor cannot be built in the air. This first floor of spiritual life is the awareness of spiritual poverty. And people achieved it in various ways: those who fought with themselves, led ascetic lives in the caves, prayed day and night… The devil deceived them in this prayer nonetheless, sometimes he would appear in the form of an angel, say something, and the holy ascetic believed him, and had already fallen into error… This is the law of struggle: there is victory, there is defeat. Sometimes defeat teaches more than a victory,” noted His Beatitude Metropolitan Onuphry.

The Primate of the UOC urged the faithful to understand themselves and overcome their sins with humble prayer.

“We cannot completely drive out the bad. Only God can do this. But at least we must turn away from it and say to ourselves: “This is bad. I’m doing this, but this is wrong. I know that it is wrong. God help me!” When a person begins to assess themselves in this way, even if this person is a drunkard, but he has already figured out himself and said that “this is bad, I should not do this,” this is already the beginning of spiritual poverty, which is the basis of spiritual life. May the Lord help us to understand ourselves and by our humble, repentant prayer ward us off evil and attach us to good,” concluded His Beatitude Metropolitan Onuphry.