Bishop David of Sitka and Alaska: Is There Such a Thing as a War of Religion? 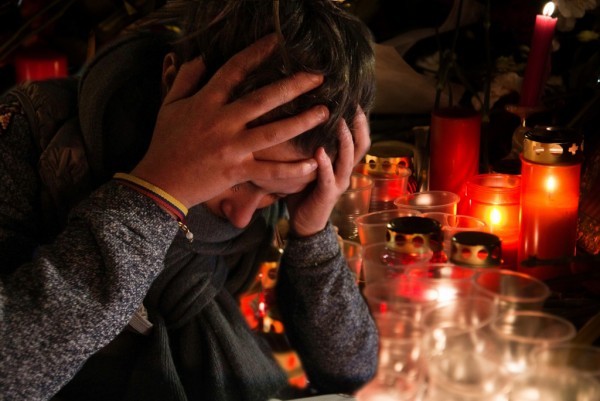 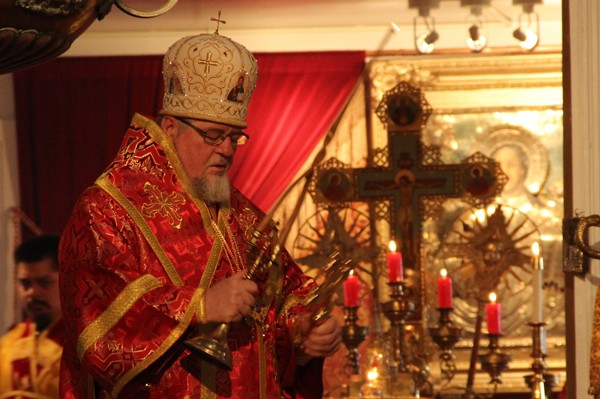 Bishop David of Sitka and Alaska

David the Psalmist and Prophet said, “Protect me, O God, for in you I take refuge.  I say to the Lord, “You are my Lord; I have no good apart from you.”   [Ps. 16.1]  After learning of the attacks in Parish yesterday, I began to think on the effect this is going to have on all of us.  Ever since the attacks on 9/11, 2001, we have been in conflict, and war, against a certain group of people who call themselves “Muslim”. In every possible way, they are the poorest example of a real Muslim in the same way a radical person who would use the name of Christ could be called a Christian.

Thus, some want to say that this is a war between Christianity and Islam, between the two major faiths of the world.  To be sure there can be no mistaking that there are a group of people acting in the most heinous and despicable manner using the name of their God, Allah, and their faith, Islam, to perpetrate a carnage and an unspeakable amount of death and harm to totally innocent people.  They are not interested in whether or not we believe they are right or wrong, they are only interested in their own twisted cause.

But is this truly a war of religion?  Is there even such a thing as a war of religion?  Would we not actually be in error if we reduce these attacks to a Christian vs. a Muslim conflict?  The last attack in France was against an organization that satirized their founder; and then they attacked the area populated by Jews.  There will certainly be people of other faiths, even ones of no faith, numbered with the victims of this and all such attacks.  So are they Muslims in revolution?  Even the head of Iran, President Hassan Rouhani condemned the attacks as not befitting the Muslim Faith.

The Friday night, as I was returning to Anchorage on a flight from Fairbanks with my daughter and granddaughter, I was led to look again at one of my favorite small books titled The Agony of the Church, by St. Nicholaj Velimirovich of South Caanan.  It is a compilation of lectures he was addressing to the Student Christian Movement which had come to Serbia from England.  It was not long after the beginning of World War I, and I think the fact that that war was begun because of a Serb, he wanted to address the tragedy of that war and impress upon the students what role, if any, the Church should play in the conflict.

After explaining to them how the various churches in each nation involved in the conflict had failed to live up to their real calling as a Church of Christ, he went on to declare the failure of Europe in general in what he referred to as “The Poverty of European civilization”.  He said the following:

The poverty of European civilization has been revealed by this war. The ugly nakedness of Europe has brought to shame all those who used to bow before Europe’s mask. It was a silken shining mask hiding the inner ugliness and poverty of Europe. The mask was called:  culture, civilization, progress, modernism. All was only vanitas vanitatum[i] and povertas povertatum[ii]. When the soul fled away, what remained was empty, ugly and dangerous. When religion plunged into impotence, then:

Science became a mask of pride.

Fight for right—an atavistic formula of the primitive creeds.

He felt that those people in that day had given up their true calling in Christ and exchanged it for a false Patriotism and Imperialism, in which each church followed their respective governments into war instead of resisting it or speaking against it.  He said that

This is exactly what has happened to the followers of ISIS, they apply a false patriotism to their religion and fail to realize the damage they are doing to the very thing they seek to exalt.

None of us will agree with their purpose or their goal, as we understand it.  But we cannot mistake their actions which are designed to elevate our anger and human passions to a boiling point so we boil over with hatred for them and sink to their level of retaliation.  They want nothing less than a global conflict so that, in their way of belief, there will be a return of the Mahdi, or twelfth Imam.  They have an eschatology as defined and shaped as the one held by many Christians.  Theirs based on a tradition handed down since the 9th century, Christianity, one based on the Book of Revelation.  In both cases, it is the view of those who hold to a very fundamentalist view of their faith that leads to this conclusion.  We all confirm our belief in the return of Christ in the Nicene Creed, recited at every Divine Liturgy.  But what we do not do is state the manner in which this will occur.  One wonders if there are some who almost hope for some type of “Apocalyptic Showdown” where the forces of one faith will be pitted against another one toward a “victory” of some sort.

The hard problem we must all face is that any attitude that places an idea of worldly victory, Christian or otherwise, it is not a victory for Christ.  St. Nikolaj stated it this way:

“Saintliness includes goodness and sacrifice, and excludes all the earthly impure spirits of selfishness, pride, quarrels and conquests.  Therefore, when the Church returns to her fundamental ideal, she will return to her elementary simplicity in which she was so powerful as to move mountains and empires and hearts at the beginning of her history. That is what the world needs now just as much as it needs air and light, i.e. an elementary spiritual power by which it could be moved, cleared up, purified and brought out of its chaos to a solid and beautiful construction.”

Every Sunday we sing the Psalm in the Second Antiphon, “Put not your trust in princes, in sons of men, in whom there is no salvation.”  [Ps. 146]  We understand that at the very foundation of our faith is to first trust God, to provide for us, to care for us, to protect us from enemies, and to trust no one else.  In the current situation, it is hard to have faith in such a way as this.  But this is exactly what the Psalmist prays, and should be our prayer, “Protect me, O God, for in you I take refuge.”  Not in anyone, or anything else, only in you.  Verse four of this Psalm we pray, “Those who choose another god multiply their sorrows;their drink offerings of blood I will not pour out or take their names upon my lips.”

Beloved, we cannot choose another god.  We cannot follow another path except the one given us by God.  We are now at a very important place in the salvation history that continually is being written in every act of every person who speaks the name of Christ.  We must tread carefully on this path.  Right now no one wants to do what we know is right.  The forces of evil are at work, and we must resist them and fight against them in every way possible; but the way to fight them is not to plunge headlong into their world, but to do what St. Paul, our Lord’s Apostle, has asked us to do.  “Bless those who persecute you; bless and do not curse them.”  [Rm. 12.14]  These are hard words for us to hear right now.

Does something need to be done to stop the continued attacks of this ISIS?  Of course.  Do we need to be vigilant in the defense of our country against such actions?  Without question.  But in the process we need to be mindful of who we follow.  God does use evil for good, it has happened before and it can happen again.  Let our prayer be that of the Prophet David when he said, “You show me the path of life.  In your presence there is fullness of joy; in your right hand are pleasures forevermore.”  Let us all seek to be in His presence where we will have fullness and joy forevermore.  Amen.

[i] vanity of vanities 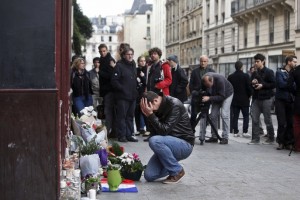 Statement of the Antiochian Archdiocese on…
Natalya Mihailova

It is with extreme sadness that His Eminence Metropolitan Joseph and the hierarchs, clergy, and faithful… 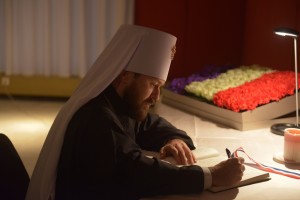 At the entrance, His Eminence was welcomed by Mr. Nicolas de Lacoste, first counsellor of the…

When we lose someone that is very near and dear to us, we are troubled by a solitary,…

Sunday of Orthodoxy: Holding Forth Our Truth

Today we celebrate our Christian Faith in an important way. We gather in our churches bringing the Sacred…

What Is So Important About Fasting?

Let us begin the fast with joy! Let us prepare ourselves for spiritual efforts! Let us cleanse our…