Patriarch Ilia II: Terrorism Nothing to do with Religion

Source: Georgia Today
Natalya Mihailova | 16 November 2015
Catholicos-Patriarch of all Georgia, head of the Georgian Orthodox Church, Patriarch Ilia II, has paid tribute to the victims of the Paris terror attacks, and emphasized that terrorism “has nothing to do” with Islam. 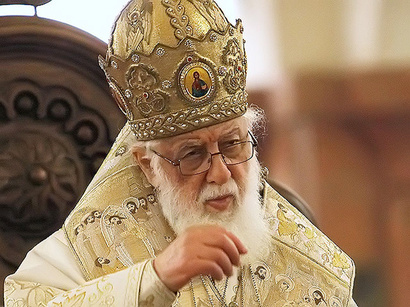 “Human beings reveal their hostility and the Islamic has nothing to do with it,” Patriarch Ilia II said.

“We ask God for peace in the world. There is a struggle between good and evil,” he said. “This [struggle] has always been ongoing, but it has been intensified recently. You know that a plane was blown up. And we also extend our sympathy to the French people – there were lots of casualties [in Paris terror attacks]. We pray for them. There are people who relate these [terrorist acts] to religion, Islam, but in fact religion has nothing to do with it; a person expresses evil will,” he added.

“Let the victims rest in peace and may god give health to those who were wounded, we extend our condolences to the families of the victims,” the head of the Georgian Orthodox Church said in his sermon in the Holy Trinity Cathedral in Tbilisi.

Meanwhile, the Georgian Muslims’ Directorate released a statement on November 14, regarding devastating shootings in Paris, on Friday night. In the statement the Directorate condemned terrorist acts.

“This is a crime directed not only against the French people, but also against the humanity, which has nothing to with any of the religion and which has no justification whatsoever,” the statement said.