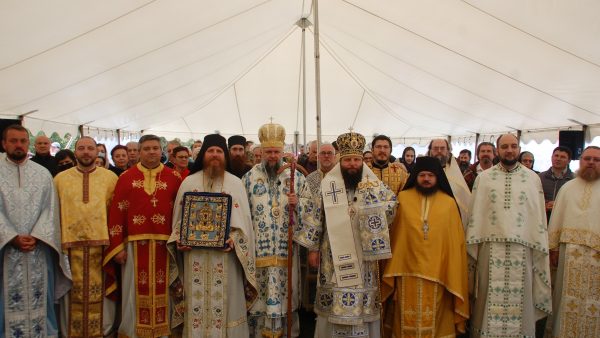 On Saturday, October 23, 2021, St Dumitru Romanian Monastery in Middletown, NY, celebrated the commemoration of its patron saint. The joy of the feast was multiplied by the presence of the wonder-working Kursk-Root Icon of the Mother of God. With the blessing of His Eminence Hilarion, Metropolitan of Eastern America and New York, the Icon was accompanied by His Grace Bishop Nicholas of Manhattan, Vicar of the Eastern American Diocese, who concelebrated Divine Liturgy with His Eminence Metropolitan Nicolae of the Romanian Orthodox Metropolia of the Americas. 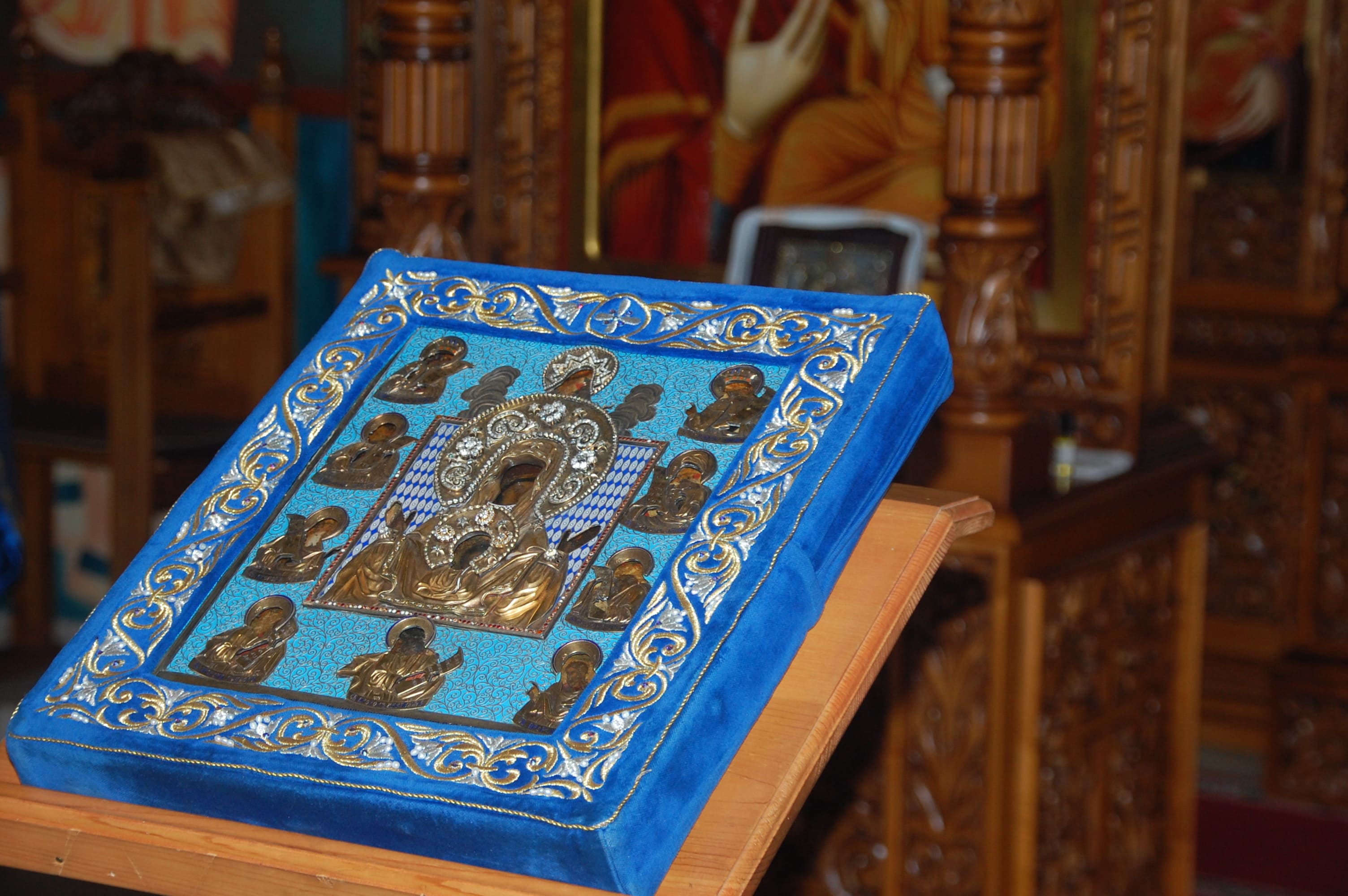 The wonder-working Kursk-Root Icon of the Mother of God. Photo: eadiocese.org

The service was rich and beautiful, not least due to the presence of nine priests, one deacon, and a large number of Romanian faithful from New York, New Jersey, Pennsylvania, Connecticut, and Virginia. Although the weather forecast predicted a cloudy, if not a rainy day, as soon as the Icon of the Mother of God arrived, the sun came out, which certainly cannot be considered a mere coincidence.

Metropolitan Nicolae, in his sermon, after speaking briefly about the life of Venerable Dimitrie of Basarbovo, said:

At the end of the service, Bishop Nicholas spoke about the history and the miracles of the Kursk Root Icon. His Grace said the following, in part:

“In 1898, some anarchists tried to destroy the icon. They planted a bomb in the cathedral, right under the analogion. At two in the morning, the inhabitants of the attached monastery heard an explosion. When they came to the cathedral, although the cathedral was totally ruined inside, the icon was perfectly intact. A true miracle. The anarchists tried to destroy the icon, to undermine the Orthodox Faith, but they ended up seeing nothing except the glory and blessing of God. Many years later, when the icon was in Germany, traveling through Europe during the Second World War, the icon was in a church and the priest noticed an elderly man standing in a corner, crying. The priest asked the man if he wanted confession, and the man responded that in 1898, when he was just a young man, he and his friends had an idea to commit an evil act: to destroy the Kursk Root Icon. As a result, they placed a bomb in the church where the icon was. He was afraid, but he was also weak in faith, so he said to himself: ‘If God exists, He will protect the icon.’ So, after the explosion, when he learned that the icon had remained intact and just as beautiful as always, the young man truly accepted God, he became stronger in his faith, and now, many years later in Germany, he was able to come before the icon and ask forgiveness. And I am certain that the loving Mother of God forgave him. Truly, another miracle!

“Saint Seraphim of Sarov prayed before the icon. Today, we too pray before it. 700 years of tears of repentance, tears of joy, of suffering, but the miraculous icon is today with us in order to help us, to allow us to shed tears before it.

“Today, in our countries from which we received many blessings, there are troublesome times. The youth are confused, the Faith is trampled underfoot. But the Mother of God came here today to remind us of the fact that we are not alone; we are Orthodox Christians, and the miracles that have occurred in the past can happen even today, in our lives. I mentioned the icon was split in two, and later the two pieces grew back together on their own. We, too, are far from the Church, we have many temptations, but we can turn around and have this union with Christ, union with the Church. This is what the holy icon brings. This icon guides us to Christ. Our prayers are heard if we say them with sincere hearts and pure minds. Just as the icon was never destroyed, no one can destroy our spiritual life. Just as the icon travels throughout the entire world, the Mother of God takes our prayers to her Son, our Lord Jesus Christ. What a miracle, what a blessing, what a joy!”

His Grace brought several gifts. To the monastery’s brotherhood, he presented an icon of the New Martyrs of Russia; to Metropolitan Nicolae, he presented an icon of Saint Nicholas hand-painted in Russia; and to all the faithful present, he personally handed copies of the Kursk Root Icon. The monastery’s brotherhood presented Metropolitan Nicholas and Bishop Nicholas each an icon, hand-painted in Romania, of the Mother of God “Glykophilousa”, or “Sweet Kiss.”

Just as always, those departed from this life were not forgotten, being commemorated at a memorial service. The feast ended with a communal luncheon, donated by faithful Christians devoted to the monastery. During the meal, there was also a short artistic program by Ana Constantin (violin), Ioana Geba (electric keyboard), the youth from ROYA, and the chanters from the Romanian parishes in New York and New Jersey.

The monastery brotherhood expressed their thanks to everyone who contributed with donations, with labor, and with prayers for the smooth running of this feast day and for the preparations beforehand to adorn the monastery, so it might become a temporary home for the Mother of God. The Mother of God left behind a sweet aroma that filled the souls (and the eyes with tears) of the faithful, the church, and the monastery.

This pan-Orthodox feast day revealed the true spirit of brotherhood and synergy in Christ’s Church, as His Eminence, Metropolitan Nicolae noted at the end.