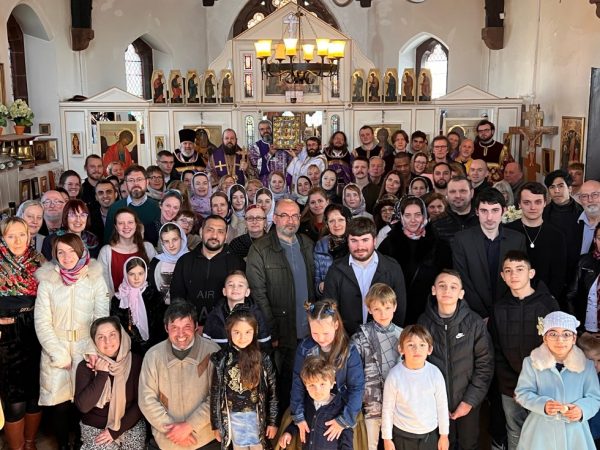 On the Sunday of St Gregory of Thessalonica, the second Sunday of Great Lent, a Hierarchical Divine Liturgy was served in the Parish of St Elisabeth the New-Martyr in Wallasey, England. The service was headed by His Grace Bishop Irenei of London of Western Europe, co-served by the Rector of the Parish and Chancellor of the Diocese, Archpriest Paul Elliott, together with Priest Justin Venn and Deacon Andrei Borisas of the London Cathedral. The Divine Liturgy was served in the presence of the wonderworking Kursk-root icon of the Mother of God, the “Directress of the Orthodox Diaspora,” which was visiting the north of England. On the eve of the Sunday, after the customary evening services, a moleben and akathist to the Kursk icon had been sung in the temple.

During the Hours before the Liturgy, following the greeting of the icon and the Bishop, the pious layman of the parish, Alban Illingworth, was tonsured Reader and ordained a Subdeacon; and after the consecration of the Holy Gifts, was ordained as Deacon. At the Little Entrance of the Divine Liturgy, Bishop Irenei, acting on behalf of the Holy Synod of Bishops, awarded Archpriest Paul Elliott with the right to wear the jewelled cross — a high award in the Orthodox Church — in recognition of his many years of faithful service both to his parish, which has grown immensely over recent years, as well as to the Diocese as a whole.

Upon the conclusion of the service and the singing of “Many Years” to the newly-ordained Deacon Alban and newly-awarded Archpriest Paul, a small reception was held by the parish, during which the Bishop was able to visit with many of the faithful and the many visitors who had come from afar to venerate the sacred icon of the Mother of God.

Later in the afternoon, the office of General Unction was served in the temple of St Elisabeth, at which the pious faithful were anointed with holy oil ‘for the healing of soul and body’. For all the Divine Services of these blessed days, tremendous numbers of faithful prayed together from all across the north of England, as well as Northern Ireland and Scotland.