Bishop Suriel of the Coptic Orthodox Church: The Christian Copts are being forcefully driven out of Egypt

Source: Assyrian International News Agency
In an age where world leaders are gifted with more power and global influence than ever before, I ask why the blaring silence and apathy? The Christian Copts are being forcefully driven out of Egypt and countless churches have been destroyed. Yet there is barely any international support and protection.
Bishop Suriel of the Coptic Orthodox Church | 02 August 2014
The following is a statement from His Grace Bishop Suriel of the Coptic Orthodox Church, Diocese Of Melbourne and Affiliated Regions. 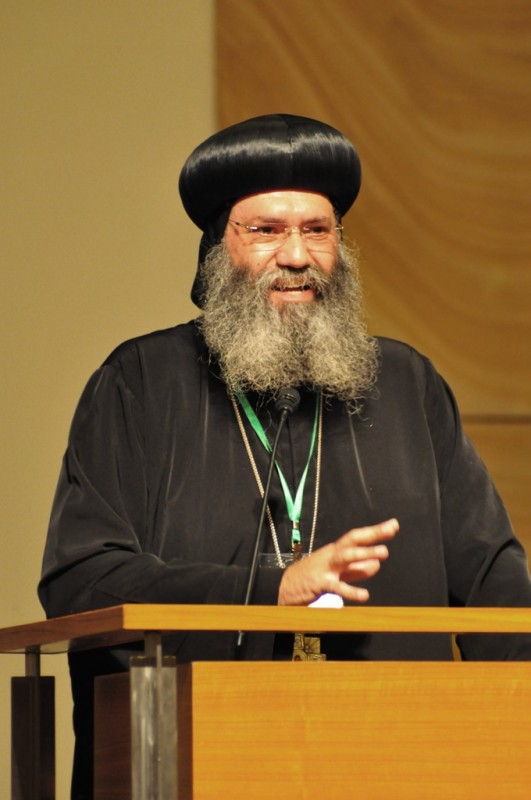 The world watches in silence as the last Christians are expelled from Mosul, Iraq in one of the most merciless and barbaric acts of genocide we have seen in the 21st Century.

Mosul, the cradle of Christianity in Iraq since the first centuries, is now purged of its entire Christian population. The ruthless and purposeful savagery of the attacks by the fundamentalist Muslim terrorist organization The Islamic State (IS) formerly known as Islamic State of Iraq and Syria (ISIS), is truly inconceivable. Yet, most world leaders remain silent in the face of the murder of innocent children and horrific beheadings of civilians. We question why the media has not highlighted the unprecedented systematic eradication of the city’s entire Christian population. We also question why the Australian government have yet to comment and condemn this gross deprivation of human rights.

There is only silence.

Silence, that sends a resounding message of indifference to the murders of innocent lives at the hands of extremist Muslim groups. Silence, which attributes lesser value to the lives of Christians in the Middle East. Silence, that surrenders to the power of radicalism and the inhumane brutality of groups such as IS.

In an age where world leaders are gifted with more power and global influence than ever before, I ask why the blaring silence and apathy? The Christian Copts are being forcefully driven out of Egypt and countless churches have been destroyed. Yet there is barely any international support and protection. Our peaceful protests and appeals to the government for action have fallen on deaf ears, time and time again. We are witnessing a heinous cleansing of the entire Christian population in the Middle East by an expanding extremist Muslim terrorist group. Are we going to sit back and watch the disaster unfold, and in so doing, contribute to the crimes against humanity? The world’s silence is fuelling these extremist terrorist groups.

In Australia, we are sheltered from the inconceivable cruelty that our brothers and sisters in the Middle East are experiencing. We live in comfort and have no impediments to our human rights. However, we will not be safe from the indiscriminate and unstoppable destruction of IS and its ancillary extremist Muslim terrorist groups for long. If, as a nation, we do not take a strong stance against these crimes against humanity, it is only a matter of time before such fundamentalism infects the entire world.

Only yesterday, it was revealed that two Australians had reportedly joined IS terrorists fighting in Syria and Iraq and are wanted for alleged terrorist activities. They proudly posted photos of themselves holding up the severed heads of fighters. Is our apathy to terrorism creating a safe haven for the breeding of Islamic fundamentalists on our shores? We call upon the Australian government to take a strong stance against these disturbing developments.