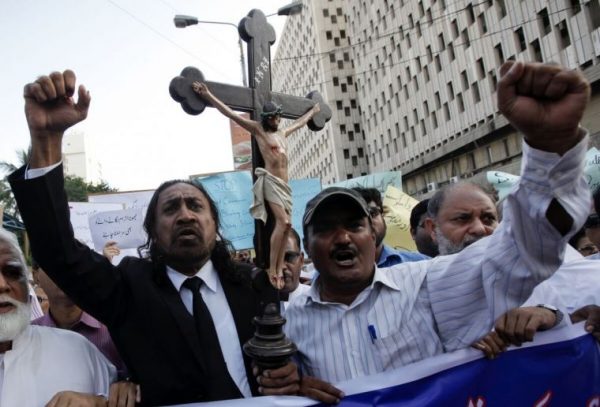 Christians protesters demonstrating against the misuse of Pakistan's blasphemy laws. The laws have been called a root cause of anti-Christian persecution. Reuters

A Christian man has been sentenced to death in Pakistan for allegedly insulting the Prophet Muhammad.

Nadeem James, 35, was convicted under the country’s controversial blasphemy laws on Friday with his lawyer, Riaz Anjum, saying he was framed.

James went on the run last July before being arrested after he was accused of sending a poem to his friend on WhatsApp that was derogatory about the Islamic prophet.

But defence lawyer Anjum told AFP news agency he was being falsely accused because his friend was angered about an affair James, a Christian, was allegedly having with a Muslim woman.

‘Mr James was handed a death sentence by the court on Thursday on blasphemy charges,’ he said.

‘My client will appeal the sentence in the high court as he has been framed by his friend, who was annoyed over Mr James’ affair with a Muslim girl.’

Under Pakistan’s blasphemy laws anyone accused of insulting Islam can be sentenced to death. Although no death sentences have been carried out, a number of those accused of blasphemy have been killed by mobs.

There have been at least 67 murders over unproven allegations of blasphemy since 1990, according to figures from a research centre and independent records kept by Reuters.

Earlier this month a Christian teenager was beaten to death by his Muslim classmates.

Sharoon Masih, 17, was battered by fellow pupils in a classroom in the Vehari District in Punjab, Pakistan, just days into his first term as the lone Christian student at a new school,

The 2017 World Watch List of the 50 countries in which it is most difficult to be a Christian by the Christian charity Open Doors places Pakistan at number four.

Patriarch Daniel Urges Everyone to Pray…

In a message on Thursday, His Beatitude Patriarch Daniel urged everyone to…

Most viewed articles
The Collapse into Chaos – Where Only God Makes Sense272
Don’t Poke the Bear: Three Reminders about the Reality of Demons181
Who are the Right People, and Who are the Wrong People?164
Patriarch Kirill: If Our People Didn’t Need the Development of Church Life, There Wouldn’t Be New Dioceses135
Patriarch Daniel Urges Everyone to Pray and Take Care of Their Health During the Pandemic71
Patriarchate of Antioch Warns Parents Against Violent Shows45
Drifting Away1
Most popular authors
Archpriest Stephen Freeman272
Fr. Gabriel Bilas181
Pravmir.com team180
Bishop THOMAS Joseph and Fr. David Hyatt164
Aurelian Iftimiu71
Priest Luke A. Veronis1