The Bishops’ Conference of The Russian Orthodox Church opens in Moscow

Source: DECR
Natalya Mihailova | 02 February 2015
On 2 February 2015, the Bishops’ Conference of the Russian Orthodox Church began its work in the Hall of Church Councils at the Church of Christ the Saviour under the chairmanship of His Holiness Patriarch Kirill of Moscow and All Russia. 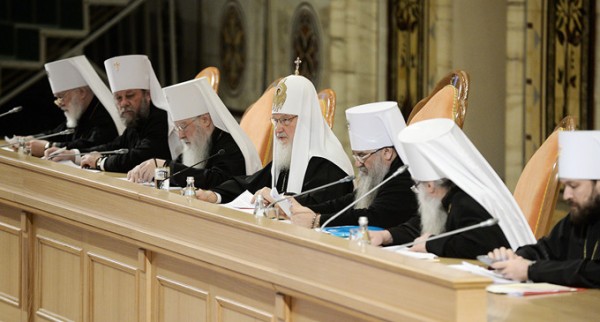 Taking part in the Conference is the majority of bishops of the Russian Orthodox Church.

His Holiness the Patriarch said a special prayer, asked nine hierarchs to sit in the Presidium and delivered a report on the main topics of church life.

The agenda of the Conference includes the discussion of the document on the participation of the faithful in the Eucharist elaborated by the Inter-Council Presence. Also discussed will be the placement of graduates of the theological educational institutions, cooperation of the ‘Sofrino’ artistic-production enterprise with the dioceses of the Russian Orthodox Church, and the status of the monastics. Metropolitan Hilarion will report on the progress in compiling the Catechism of the Russian Orthodox Church.

While addressing the bishops, His Holiness Patriarch Kirill said: ‘Several months ago the Holy Synod considered the convocation of the Bishops’ Council in 2015. After a thorough discussion we decided to hold only a Bishops’ Conference, which character is not denoted in the documents of our Church.

‘There are several reasons for this. First, the Bishops’ Council held two years ago took several important decisions which could not be implemented so quickly, and one can talk about the intermediate results. Secondly, the necessity in the extended meeting of bishops was obvious, as the Inter-Council Presence has prepared several documents which we will discuss and edit, if need be, in order to present hem to the Holy Synod for approval. I hole that we will also consider some other documents on the church governance.’

His Holiness also spoke about the situation in Ukraine. The participants sang ‘Memory eternal’ to the late Metropolitan Vladimir of Kiev and All Ukraine, and to the pastors of the Russian Orthodox Church who had lost their lived in the civil confrontation in the country.

Most viewed articles
Of Boasting and Modesty96
His Holiness Patriarch Kirill Contracted the Coronavirus93
4th Plenary Session between ROC and Coptic Church Held71
What Does the Cross Mean for us Today?17
Most popular authors
Pravmir.com team164
Archpriest Basil Ross Aden96
Priest Robert Miclean17