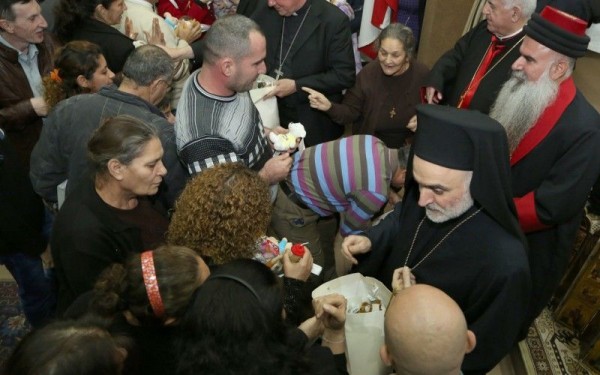 Christ is being “reborn again in the lowly stable” this Christmas because of the remarkable faith of Iraqi Christians who were driven out of their homes, a group of Australian bishops have said after visiting refugees in Lebanon and the displaced in Erbil, Iraq.

The December 15-19 mission of the seven bishops was aimed at offering spiritual support, humanitarian aid and hope to Christians exiled from their homes in Mosul and the Nineveh Plain after they refused to convert to Islam.

Around 120,000 Christians were displaced in the incursions last summer by ISIS militants. Nuns and clergy, including bishops, are among the displaced in Irbil, the capital of the Kurdistan region of Iraq.

During the visit to Iraq, the bishops met families still camped in tents on church grounds, in half-finished buildings or in pre-fabricated huts in Erbil as well as in some surrounding villages.

“So many of the people we met said, ‘We lost our homes, our lands, our jobs, all our possessions — everything — but we will not lose our faith,” Archbishop Julian Porteous of Hobart told Catholic News Service in Beirut. “You can feel the faith.”

An elderly woman told the bishops that when she was threatened by the Islamic militants and ordered to convert to Islam, she defiantly responded: “I am a Christian. I will not convert. You can kill me if you want.”

“We saw extraordinary courage and depth of commitment to the Christian faith,” Archbishop Porteous said. “It is quite remarkable.”

So many people in Erbil are desperate to leave, fearing ISIS will make further advances into Iraq, Archbishop Porteous said. Every week about 100 people leave Erbil, going mostly to Jordan, Turkey and Lebanon, typically with the ultimate desire to be resettled in a Western country.

The Australian visit followed the designation of December 7 as a day of solidarity and prayer for persecuted Christians in the Middle East by the Australian Catholic Bishops’ Conference and the Conference of Bishops and Representatives of the Middle Eastern Apostolic Churches in Australia and New Zealand. The delegation said a special collection that day will help 1,000 families each month until Easter 2015.

The funding “is just a drop in the ocean, but still it is a drop nonetheless,” said Archbishop Christopher Prowse of Canberra.

The displaced are now coping with a difficult situation because it is very cold, the bishops said. Temperatures will soon be dropping below freezing.

Despite their suffering, the joy of Christmas was evident, deepened by a faith ignited by the persecution. One of the displaced bishops blessed a beautiful manger, and hundreds of people who attended the ceremony clapped and cheered. A children’s choir, organised by a priest, was rehearsing carols, including Joy to the World and Silent Night for a Christmas concert.

“We were touched by the gospel of faith in these plains amid outright persecution,” Archbishop Prowse said.

Reflecting on “the horrific stories” the people shared with the bishops, he said the atrocities need to be “condemned outright” and told throughout the world.

“We will tell their story of Christ being crucified again and being reborn again in the lowly stable,” he said.

In addition to Archbishops Porteous and Prowse, the delegation included bishops of various rites from Sydney; most of their jurisdictions include much of Australia and sometimes New Zealand: Melkite Bishop Robert Rabbat; Chaldean Bishop Djibrail Kassab; Maronite Bishop Antoine Tarabay; Coptic Orthodox Bishop Daniel; and Archbishop Danil Bolis of the Ancient Church of the East.

About 10 percent of Christians in Australia are from the Eastern churches.

In Lebanon, the delegation met with Church leaders, including patriarchs of the Maronite, Syriac and Melkite Catholic churches, who told the bishops that the Western world has largely ignored the plight of Middle East Christians.

Maronite Archbishop Paul Matar of Beirut, who hosted delegation members in Lebanon before their return to Australia, called for more such Church delegations from other parts of the world to also raise funds and visit the displaced.

Most viewed articles
We Are Not Saint Mary of Egypt (But We Can Still Repent)206
Dining with Caesar142
Orthodox Priest Rescues Two People from Fire in Constanța119
What Does Asceticism Look Like?41
Archbishop of Australia Attends Commemorative Events for Battle of Crete in Melbourne35
Orthodox Chapel to Be Constructed in Campina das Missoes12
Ukrainian Church Calls for De-Escalation of the Conflict in Donbass11
Most popular authors
Archpriest Geoffrey Korz206
Archpriest Lawrence Farley142
Aurelian Iftimiu119
Pravmir.com team57
Archpriest Michael Gillis41
Maria Trushanina1