Brave Is the One Who Believes in Resurrection

Source: Orthodox Life (Russian)
The fact which no one disputes is that the history of the Church began in Jerusalem with a small group of twelve people.
Fr. Andrei Gavrilenko | 30 April 2022 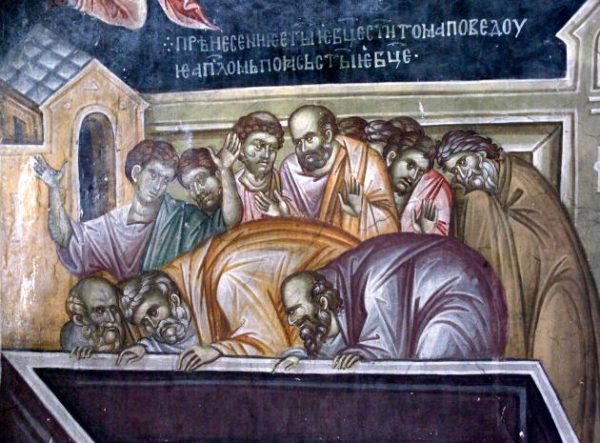 It was the backbone of a small early Christian community consisting of 120 members, simple, uneducated, low-born and poor people. The 12 fishermen faced a developed, civilized vast pagan world with a thousand-year history, advanced culture and world power.

The apostles preached faith in the Risen Christ, God incarnate. The faith that is not simple. It demanded repentance from a person – that is, a complete change of life: turn the heart inside out, cleanse it and fill it with holiness. Grace broke down the foundations of sin. It was a preaching of a brave outlook on life. One had to completely change one’s worldview. A pagan, entering the Church, inevitably underwent a crisis of worldview. Repentance is called a change in the way of thinking for a reason.

First, a pagan had to accept that the Bodiless God became a man and diminished to the shameful death on the cross, with which Rome executed the rebel slaves and pirates.

The power of this temptation was well expressed by St. Paul – the preaching about the Cross is “foolishness” for the Greeks (1 Cor. 1:23). One had to believe in this foolishness, that God can humiliate Himself in order to exalt a person, that God can become a person – a piece of matter despised by all self-respecting philosophers. Plato expressed the idea of ​​contempt for the body with the words “soma – sema”, i.e. the body is a prison for the soul. This phrase went among the masses and was considered an axiom. The apostles needed to destroy this axiom in order to preach the return to the body of Jesus Christ – that is, the Resurrection. If the body is a prison, then the Resurrection is foolishness- the apostles had to prove the opposite view on the body. They had to convince that we are created in the image of God, that God wants both the immortality of the soul, and the immortality of the body. He gives this immortality through obedience to death and through the Resurrection of His Only Begotten Son.

Second, Christianity itself unwittingly declared war on pagan religious and political foundations. In Rome, religion was inseparable from politics. Christianity abolished polytheism, saying “all the gods of the nations are idols” (Ps. 96:5), and therefore denied the divinity of the emperor. The power of Rome thus lost its divine sanction and became a mere earthly system of power. For the Roman it was a shock. The religion of Jesus, instead of brute force and the cult of world domination, frankly declared the height of humility and meekness in the face of God. Rome couldn’t tolerate that. The teaching of the crucified and Risen Jesus was outlawed. This was well noted in one of his Paschal sermons by the Holy Martyr Anatoly Zhurakovsky: “In alliance with Judaism, this pagan world set the task of crushing the newly emerged teaching, which it hated. It stubbornly and relentlessly began the struggle, either by brutal violence, cruel and bloody executions, or by subtle political cunning, trying to wrest the best and most solid from the ranks of Christianity and put the Church in a position of complete lack of rights and complete helplessness. “You must not exist, you must not live —non licet vas esse,” the pagan emperors solemnly declared to the Christians.”

It seemed that Christianity was doomed. But after Golgotha ​​and the empty cave in the Garden of Gethsemane, the power of the Resurrection entered the world, which, contrary to all possible expectations and human calculations, inexorably led the world to the feet of the Risen One, in order to lay down their arms and confess Him with the words of the Apostle Thomas: “My Lord and my God” .

It was courageous Christianity, with its belief in the resurrection, in eternal life, that gave birth to social service, inspired to a feat, regenerated and inspired humanity. The invisible Christ, Who after His Resurrection promised to be with us “all the days until the end of the age” gave strength to the highest aspirations of the human spirit: the dignity of a woman, the ideal of fidelity and equality in the family, pensions, care for the elderly, widows, orphans and the disabled, love for children – all these are the fruits of life with the Risen Christ. Not only that, technical progress itself, the fight against hunger and disease all come from the Church of the Risen Jesus. The same Holy Martyr Anatoly noted that the Invisible is infinitely real, it moves an infinite multitude of human beings, creates, destroys, re-creates human societies, inspires with its breath the brightest and best human lives: “Christianity with all that it brought to the history of mankind , into philosophy, science, art, into the realm of human morality, into the innermost depths of the human spirit, the highest spiritual aspirations. Like an immeasurable huge building, erected by forces beyond all understanding, it stands before our eyes. Who created it and where is its foundation? We know that it is built on the Divine and Living stone. At its foundation is Christ the Crucified and Risen.”

Christianity placed humanity before the Living God, the sacrificial God, the Loving God. God in Christianity also acts as a Just Judge, who will come to judge the living and the dead. The Law of the Resurrection is inextricably linked with the law of retribution, righteous retribution. Resurrection requires life according to the laws of Eternal Life: in order to live forever near the Good God, one must adapt one’s feelings to goodness already on earth. To live forever in the presence of Christ, one must already live in the presence of the Omnipresent Father.

Faith in the Resurrection obliges one to account for the life lived. This is the great revelation of Christianity! Faith is an act of courage. Unbelief is just a screen on the heart of the weak. Let us turn again to our Kiev theologian-New Martyr Anatoly Zhurakovsky: “Oh, certainly, unbelief is not at all a product of the human mind. Do not believe this lie, it is illegally and self-appointedly covered up in the name of reason. Unbelief is born in the heart, in its dark and sin-defiled depths. Even the Psalmist revealed this: “The fool hath said in his heart, There is no God.” (Ps. 14:1). They don’t believe because they don’t want to believe. To believe in God is too scary, it obliges. If there is God, it means that there is retribution, there is an impartial and terrible court, and before this court one must answer for every hour, for every moment, for every step of one’s life. If there is God, then everything is in His will, and I cannot leave His will. And if there is no God, then it is my will, and everything is allowed to me, and I can enjoy and rape, kill and commit crimes, because there is no crime and the law of life, but only my unrestrained “I want”. I do not want retribution, I do not want any other thought incompatible with my desire for truth. I don’t want there to be a God and there isn’t. There shouldn’t be, and there isn’t. This is the true logic of unbelief.”

Why Is Envy So Dangerous? How to Defeat It?

Everything that the tenth commandment speaks of can become an object of desire. We look with envy at…

How to Set Your Heart on Spiritual Life? Advice from New Martyrs

The last words of the Apostle Peter to his beloved wife before her martyrdom were: "dear wife, remember…

How to Survive in Modern City. 8 Essential Conditions

God teaches us that our soul is of more value than the whole world (Matthew 16:26).