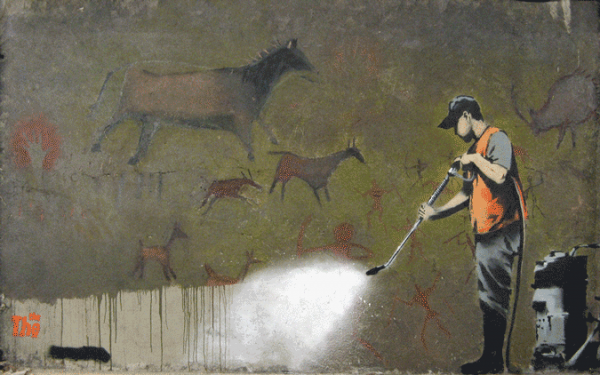 I have long been convinced that “believing” is grounded in something other than intellectual activity. I am simply unimpressed by most of the intellectual arguments that I see regarding both belief and unbelief. In both, I hear so much that is unspoken, and even much that is likely hidden from the speakers themselves. That being the case (if I am right), then conversations about belief require great patience and not a little sympathy.

We live in a world that is packed with meaning – at least – that has been the human experience for longer than recorded history. We do not know, for example, what the cave paintings left by our prehistoric ancestors mean, but we can be assured that the paintings had a meaning at the time. Indeed, their paintings are a strong reminder that we have ever-so-much in common with them despite the vast differences in civilization that separate us. We do not know what the paintings mean, but we know something of the urge to paint.

The Church describes human beings as made in the image of the Logos. On that basis, we are sometimes hymned as “rational (logikos) sheep.” Human beings think and speak. There is a relationship between the thing that we perceive (say, an Auroch) and its depiction (a wall painting). The walls of the caves are covered in logoi, “words,” if only we knew how to read them!

When human beings speak, we inadvertently offer a world-beyond-the-world. There is the experience (my vacation), and there is the telling of the tale (“you won’t believe what happened on my vacation”). Were someone to insist that only the thing-itself mattered (“therefore, I don’t want to hear about your vacation”), the world would soon collapse into a muteness that even the animals transcend.

I believe that a common element within human experience can be suggested by the word “transcendent.” It is an experience of beauty, of goodness, of wonder, that goes beyond itself. It demands poetry and art, songs and symbols. And despite our love of technology and the giftedness of our machines, it is the transcendent that speaks most fluently to our lives. We get out of bed in the morning because of transcendence (or so I believe). The loss of transcendence is something akin to death.

With the experience of transcendence comes our effort to express it. We reach for words, for images, for symbols, for anything that suggests what we want to say. And, strangely, transcendence wants expression. We can only suppose that early humans found animals to be filled with wonder. Animals live, breathe, eat, multiply, but they also supply food. Their strength and their skills provoke admiration.

Much the same could be said of the stars. Our modern experience of the night sky is greatly limited, having become but a poor hint of its natural brilliance and wonder. The first time I saw a night sky in the high desert I was almost frightened. You could have read a book by the light of the Milky Way. When the Moon appeared, it loomed with a brightness I had never imagined. The stars we group together as the signs of the Zodiac were obvious: they begged to be named and observed.

All of these early observations suggested to our ancestors a world of meaning. Creation does not just exist: it is patterned. Seasons resonate with plants and animals and suggest their own reckoning.

In our modern period we see far less of the sky and animals, much less the plants and the movement of the seasons. Our houses are much the same temperature year-round. We are, instead, observant of a meta-world, the narrative of the endless news cycle, driven by disaster, fear, speculation, and distraction. Our advertising (always present) bathes us in oil, sugar, salt, and sex while promising an endless supply of dopamine.

I am struck by the preponderance of unbelief in our day and time. Frequently, the “problem of evil” is cited as an overwhelming obstacle to belief. I think of this in particular when I consider that antiquity was dominated by far more suffering on a daily basis than our present age. Our lives would seem magical in their easy dismissal of childhood diseases, our caloric intake, and the unending variety of all things offering themselves for consumption.

If, as I believe to be the case, we are created for wonder and transcendence, then it would seem that we are malnourished and suffer from starvation in our souls. If everything that troubles us within the “problem of evil” were to miraculously disappear, or even be diminished for the greater part, it would do nothing to nourish our souls. In a certain manner, we live in a vegetative state in which our “needs” are met while our true hunger is ignored.

The “belief” that is native to the human soul is among the casualties of the modern life-style (in all its aspects). We are not particularly nurtured with awe and wonder, but by the consumption of pleasure and the avoidance of pain. Our pleasure/pain principle has created a shallow culture. In short, we do not suffer well (as in somehow becoming better, more compassionate people), nor are our pleasures remotely sublime. Two words: reality tv. We have become a people among whom the cheap-shot versions of atheism easily prosper.

I have an aside that is worthy of note. I have been particularly struck over the years of my pastoral ministry at the abiding interest in the Church within the ever-shrinking community of young couples who are starting families. My experience is anecdotal, such that I can point to no statistics. But those conversations point me in the direction of transcendence. Few things in our modern lives are as primitive as child-bearing. Indeed, there are more opportunities today for various iterations of “natural” child-birthing than there were 40 some-odd years ago when my wife and I were having our first. Equally of note is the inherent transcendence involved in the conception and birth of a child. It is risky, and involves a strong awareness of vulnerability. So much can go wrong. To raise a child attentively, is (and should be) awe-inspiring. They are examples of transcendence embodied.

The experience of belief begins, I think, with the experience of transcendence, the questions of meaning and significance. It is a conversation that struggles to find its way in a sea of commodities and mundane pleasure. We are not immune to the transcendent – but simply distracted.

In Jesus Christ, we confess, Transcendence became flesh and walked among us. He is the Gateway to seeing the fullness of all that is. To see this, of course, involves the healing of the soul. Beauty, Truth, Goodness are medicinal balms. It is a medicine that drips from every leaf, is painted across the sky, rests in the bosom of everyone we meet, and dwells secretly within our own heart.

In this day and time, we may largely be doing a ministry of “triage,” healing those souls that are given to us, and tending to our own wounds as well. Take time to breathe, to listen, to look, to look beyond, to yearn, to do something beautiful, to love, to forgive.

May God have mercy on our souls.