Source: Orthodox Christian Network
“How many more crimes against humanity does the world wants to see before it finally speaks up? Where are the conscience and the sense of responsibility of the world leaders? Where are the principles of ethics and objective journalism by the mainstream media?"
Natalya Mihailova | 08 August 2014
World Council of Arameans, Beirut: Last night, two Aramean children and a mother were killed as a result of a shameless attack by ISIS terrorists against Baghdeda (Qaraqosh) in North Iraq. At the same time, in the middle of the night, more than 40,000 Aramean families – comprising at least 200.000 human beings – fearfully fled their ancestral homes, towns and villages in the Nineveh region. Another unprecedented humanitarian disaster is now unfolding in Iraq. 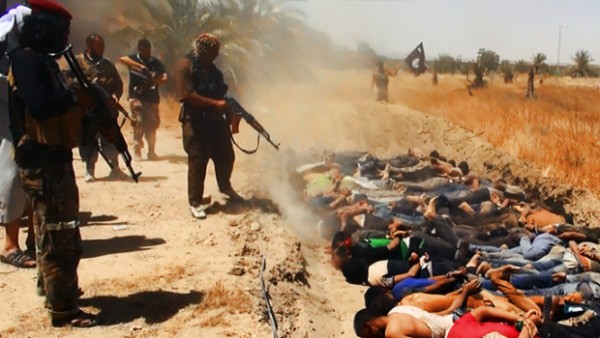 Most recently, thousands of Aramean families had already escaped the Mosul region to the Nineveh province, after the Islamic State of Iraq and Syria (ISIS) terrorists rampaged the area. The Syriac Orthodox Archdiocese of St. Matthew, including its fourth-century Monastery of Mor Matay, and other local dioceses have been closed.

The Nineveh plains are now emptied from its native Christians, who belong to the Syriac Orthodox, Syriac Catholic, Chaldean and Assyrian (Nestorian) churches in the region. This is the second region that has been emptied from its Aramean population for the first time in its millennia-old history. Thus, an ancient civilization, cultural heritage and population have been destroyed and erased from Iraq’s future.

The majority, if not all, of the local Muslim population apparently did not fear their lives to abandon their homes, while the Kurdish Peshmerga fighters suddenly retreated. The withdrawal of the Kurds is striking, particularly in light of a similar situation that took place a few days ago where thousands of Yezidi men, women and children were abandoned and sacrificed to ISIS by the Peshmerga.

All the developments that have been taking place in Syria and Iraq, once again reveal that there is a clear agenda to divide Iraq into three portions: a Shiite, Sunni (ISIS-controlled) and Kurdish part, whereas defenseless and vulnerable minorities like the Aramean Christians and Yezidis are forced out of their ancient homeland.

The World Council of Arameans (Syriacs) (“WCA”) condemns in the strongest possible terms this latest ISIS invasion. This is nothing short of genocide and ethnic cleansing. A new humanitarian disaster is unfolding and the international community simply does not seem to care.

The WCA President, Johny Messo, expressed his deep concerns as follows: “How many more crimes against humanity does the world wants to see before it finally speaks up? Where are the conscience and the sense of responsibility of the world leaders? Where are the principles of ethics and objective journalism by the mainstream media? We urgently call upon the international community, spearheaded by the United Nations, the European Union, Council of Europe, the Arab League and the Organization of the Islamic Conference, to act immediately and without further delay. Not to speak is to speak and not to act is to act!”

Mr. Messo further explained: “Yesterday we arrived to Lebanon to discuss the deteriorating situation of our people in Iraq and Syria with the Syriac Orthodox Patriarch and today we would join His Holiness and the Patriarchs of the other native churches in the Middle East at a press conference this afternoon where a joint declaration would be issued. This morning, however, we were deeply shocked when His Holiness broke the news to us. We are all very troubled by this news.”

Before the USA and its allies invaded Iraq in 2003, the Aramean Christian population consisted of 1,4 million souls. Today, less than 400,000 Arameans have remained in their homeland. With the latest developments taking place, the future of this ancient indigenous population of Iraq is at the brink of extinction. In Syria, the same developments have been taking place. Similar attempts of genocide and ethnic cleansing were already successfully accomplished in Turkey in the last century, which saw its numerous native Armenian, Greek and Aramean populations dwindle to less than 100,000.

In all these cases, the foreign policies of Western countries have turned out to be utterly destructive to the many hundreds of thousands of native Aramean Christians who experienced persecutions, beheadings, crucifixion, kidnappings, expulsions and more. Simultaneously, Western governments and mainstream media have remained utterly silent and ignored the cries for help by the Arameans.