Source: ROCOR
Natalya Mihailova | 14 May 2015
With the blessing of His Eminence Metropolitan Hilarion of Eastern America and New York, First Hierarch of the Russian Orthodox Church Outside of Russia, St John the Baptist Cathedral in Brooklyn hosted a celebration of the 100 th anniversary of the repose of St Raphael of Brooklyn. 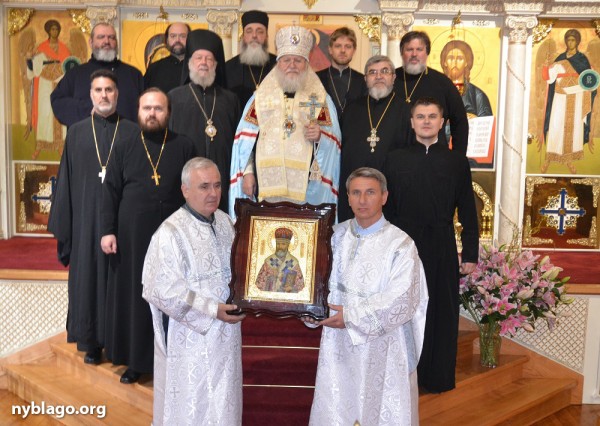 Bishop Raphael (Hawaweeny, born in 1860 in Damascus, died in 1915 in New York), is particularly revered by the Russian Orthodox Church and other Orthodox churches in America. He was an eminent ecclesiastical and social figure in the early 20 th century in Brooklyn, NY, and in the US in general. He was born in Syria, graduated from Halki Seminary and Kiev Theological Academy, taught at Kazan Theological Academy and was the rector of a church in Moscow. During his service in America, he united Orthodox Christians of various backgrounds under his omophorion.

The fact that the anniversary of his death was celebrated at St John the Forerunner Church in Brooklyn is particularly noteworthy, as this church likewise gathers Orthodox Christians of various nationalities together for prayer.

An icon of St Raphael of Brooklyn was placed in the center of the church; it was painted especially to mark this anniversary by monks of the Kiev Monastery of the Caves. The celebrations began with the consecration of this icon by Vladyka Hilarion.

Then, under the magnificent singing of the cathedral choir, an akathist was read to St Raphael in two languages: Church Slavonic and English.

Fr Photios, Professor of Philosophy at City University of New York, delivered a lecture titled “The Life, Work and Significance of St Raphael,” attended by all the clergymen, parishioners and guests.

The event concluded with a festive dinner during which the clerics shared expressions of joy at this opening event of the celebrations of St Raphael.

On May 2, the feast day of the Translation of the Relics of St Matrona of Moscow, at the request of the priest, warden and parishioners of St John Cathedral and with the blessing of His Eminence Metropolitan Joseph, Antiochian Archbishop of New York and Metropolitan of All North America, a portion of the relics of St Raphael was brought to St John the Baptist Cathedral by Fr Thomas. St Raphael was in fact the founder of St Nicholas Cathedral in Brooklyn.

On May 3, the celebrations of St Raphael’s jubilee concluded at St John the Baptist Cathedral, the saint’s relics already there. Many people from the New York area came to venerate them. Metropolitan Hilarion celebrated Divine Liturgy.

Fr Alexander greeted Vladyka Metropolitan at the cathedral and delivered a few words to those in attendance, expressing gratitude to the Firest Hierarch for his blessing of and participation in this great event. Fr Alexander also shared his thanks for the visit to the cathedral by Metropolitan Hilaron and his clergymen.

Participating in this service were Fr Alexander; Archimandrite John (Modzalevsky) of the Diocese of Moscow; Priest Konstantin Gavrilkin, a clergyman of the cathedral; Fr Photios; Fr Tikhon; Protodeacon Vadim Gan of the Synodal Cathedral of Our Lady “of the Sign”; Protodeacon Daniel Puchkov of the Moscow Diocese and Deacon Peter.

The Primate of ROCOR then congratulated everyone on participating in the celebrations and expressed thanks to the rector, warden, singers, parishioners and guests.

Most viewed articles
The Trap of Religiosity80
Faith and Moral Freedom80
Patriarch Kirill: “The Memory of the New Martyrs will Help Us to Be Faithful to Christ amid Modern Temptations”80
Bishop Nicholas of Manhattan visits Holy Cross Monastery in West Virginia74
Lord, Save Me!65
Patronal Feast Celebrated in St. Anna Convent in Vashkivtsi43
Condolences of Patriarch Kirill over the death of believers in the fire that broke out in Abu-Seifein Church in Cairo36
St. Tikhon Church to host Liturgical Music Symposium in October 202224
25 Years of Help: the Ship-Church Goes On its 25th Voyage to Distant Villages24
Most popular authors
Pravmir.com team281
Vasileios Stoyiannos80
Archpriest Michael Gillis80
Fr. Theodore Stylianopoulos65