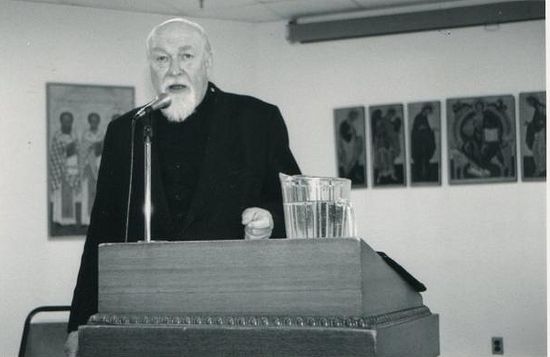 The City Council of New York approved the renaming of a number of streets and public places at its meeting on December 19. Among the honorees is Archpriest Paul Schneirla (+ 2014), who served as the parish priest of St. Mary’s Antiochian Orthodox Church in Brooklyn for over 50 years, reports Brooklyn Reporter.

“Whether they are veterans, first responders, community activists or just everyday heroes, it has always been a distinct honor for me to help dedicate a little piece of our neighborhood to the people who left an indelible mark,” commented City Councilmember Justin Brannan.

Thus, the intersection of Ridge Boulevard and 81st Street, where the Church of the Nativity of the Most Holy Theotokos is located, where Fr. Paul served, has been given a second name in Fr. Paul’s honor.

According to information provided to the Brooklyn Reporter:

Father Paul Schneirla served as the first pastor of St. Mary’s Antiochian Orthodox Church on Ridge Boulevard in Bay Ridge from its inception in 1951 to his retirement in 2002. Schneirla was a pioneer convert member of the clergy, author and renowned theologian with a long list of noteworthy accomplishments, including being a member of the general board of the National Council of Churches beginning in 1940. He was also the last surviving member of the original founders of the Standing Conference of the Canonical Orthodox Bishops in the Americas. He served as a priest of the Antiochian Archdiocese for 71 years, and was the first chairperson of its Department of Christian Education.

In addition to his tenure as pastor of St. Mary’s Church Fr. Paul also served for many years as a professor of Old Testament at St. Vladimir’s Orthodox Theological Seminary in Crestwood, NY, as Corporate Secretary of the Antiochian Orthodox Christian Archdiocese of North America, as Vicar General of the archdiocese’s Western Rite, and as a frequent commentator and speaker for many media outlets. He served as the first chairman of the Department of Christian Education and as the Dean of the Atlantic Deanery. He was the first editor of the “WORD” Magazine. As the Ecumenical Officer for the Antiochian Archdiocese, Fr. Paul was a charter member of the Orthodox-Anglican, Orthodox-Roman Catholic, and Orthodox-Polish Catholic Theological Dialogues and had been a General Board Member of the National Council of Churches since the 1940s.