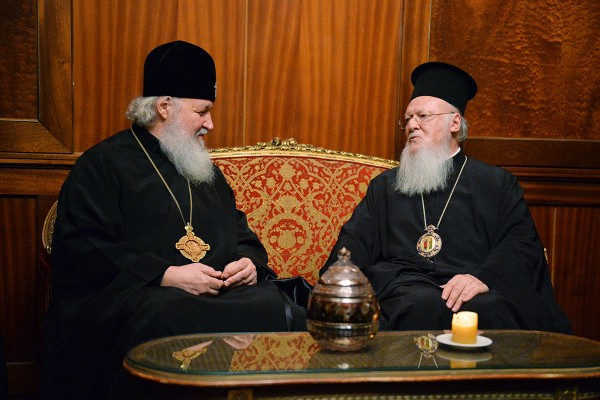 His Holiness Patriarch Bartholomew of Constantinople warmly greeted the Primate of the Russian Church and his suite and expressed his joy over the participation of Patriarch Kirill in the meeting (synaxis) of the Primates and representatives of the Local Orthodox Churches.

“I thank Your Holiness for inviting me to take part in the meeting,” Patriarch Kirill said. “You know that during the first week of Lent we have strict discipline and every morning and evening I celebrate divine services at various Moscow parishes. However, having received your letter, I decided to come here.”

Patriarch Bartholomew said he understands what regret the Moscow flock feels due to the departure of the Bishop of Moscow, noting, at the same time, that the forthcoming meeting of the Primates of the Local Orthodox Churches will contribute to the unity of the Church.

During the fraternal meeting, the Patriarchs discussed various issues.

According to the Orthodox Lenten tradition, Patriarch Bartholomew and Patriarch Kirill asked each other for forgiveness and for prayers.