Bulgaria celebrated the founders of the Cyrillic alphabet

Source: Standart News
Natalya Mihailova | 12 May 2014
On May 11, the founders of the Glagolic alphabet were celebrated with speling tests on yesterday's Saints Cyril and Methodius' Day in the Bulgarian capital. 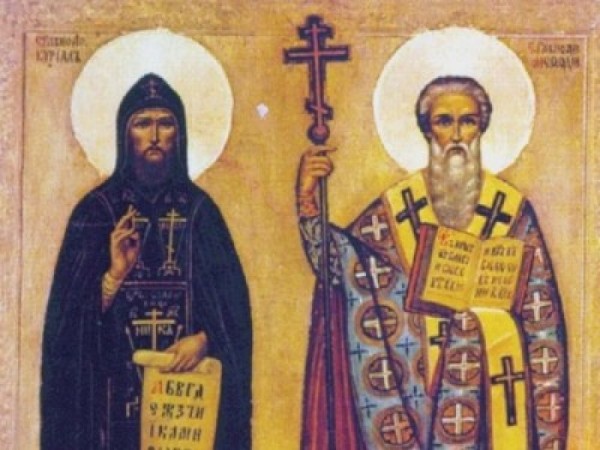 The name Kiril has the meaning of „lordly” (from Old Greek), while Metodi means “the one who studies, who follows a method’. The church feastday of the Holy brothers, St. Cyril and St. Methodius, is on May 11th, but under the influence of the day of Slavic Literacy and Culture on May 24th, people very often celebrate on this day as well.

The day of the two brothers was firs commemorated in 1851.

Cyril and Methodius (or Constantine and Methodius), known as the Apostles of the Slavs, were born in Thessalonica, in 827 and 826 respectively. In preparation for a mission in Moravia, Cyril invented a new alphabet and, with the help of Methodius, translated the Gospels and the necessary liturgical books into that new South Slavonic language.

Cyril died in Rome, 4 Feb., 869. Methodius went to Constantinople and with the assistance of several priests he completed the translation of the Bible and ecclesiastical books into Slavonic. Methodius followed his brother on 6 April, 885.

Most viewed articles
What Is Rejected Becomes the Cornerstone121
The Forgotten Virtue of Stability93
Hierarch of the Jerusalem Patriarchate Speaks in Support of His Holiness Patriarch Kirill92
Utah Church Prepares, Welcomes All for Consecration89
His Beatitude Patriarch Theophilos III and bishops of the Russian Church Abroad attend a concert marking the 150th anniversary of the birth of Sergei Rachmaninoff in Jerusalem88
The Savior of the Hopeless, or Is It Possible to Be a Good Person and Not Be Saved?74
Supreme Court Overturns Roe v. Wade in Mississippi Abortion Ruling66
‘The post-Roe generation’: Pro-lifers set their eyes on heartbeat bills, chemical abortion bans65
Most popular authors
Pravmir.com team269
Archpriest John Moses (+2019)121
Hieromonk Gabriel93
Alexander Tkachenko74
CBN News66
Ryan Foley65