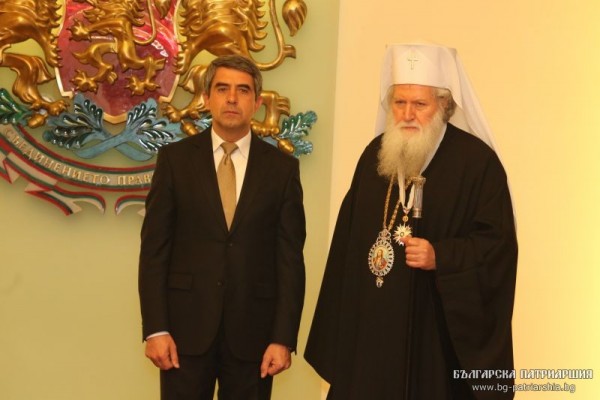 The event was held at the Coat of Arms Hall at the President’s Office.

It was attended by representatives of the government, the National Assembly, the Bulgarian Orthodox Church, and the Bulgarian Academy of Sciences (BAS).

The Head of State delivered a speech, referring to the reasons for conferring one of the highest state orders on the spiritual leader of Bulgarian people.

“This order is a modest expression of our recognition, Your Holiness, of the services you have rendered for many years to Bulgarian people in a selfless manner. This order is a sign of gratitude on the part of Bulgarian statehood for your wise guidance of the Bulgarian Orthodox Church. Patriarch Neophyte has always favoured the unity of the church, being led by the thought of people’s welfare,” President Plevneliev stated.

In his words, since heading the Bulgarian Orthodox Church, Patriarch Neophyte has more than once lent support to people in distress and has urged the nation to show solidarity.

Rosen Plevneliev also said the Patriarch strengthened not only the Orthodox faith through his activity but also the traditionally good relations between Bulgaria’s major faiths.

Most viewed articles
On Why We Must Reproach Ourselves112
Look What I Have Done!108
Metropolitan Hilarion Visits a Russian Church under Construction in Cyprus96
A Regular Session of ROCOR Synod of Bishops Held in New York85
The Healing by the Pool of Bethesda77
Metropolitan Hilarion of Volokolamsk meets with Archbishop Chrysostomos of Cyprus76
Church of Martyrs and Confessors of Communist Prisons to be consecrated in Târgu Ocna57
Metropolitan Hilarion meets with leaders of a major inter-Cristian humanitarian organization47
Patriarch Porfirije: There is No Peace without Peace with God and the Desire to Live According to God’s Commandments46
Life Savers9
Most popular authors
Pravmir.com team350
St. Dorotheos of Gaza112
Fr. Stephen Powley108
Fr. Theodore Stylianopoulos77
Ștefana Totorcea57
Archpriest John Moses (+2019)9