Source: DECR
Natalya Mihailova | 04 December 2014
‘Bulgaria–Russia: Images of Spiritual Unity’ Conference took place in Sofia on 29 November 2014 with the blessing of His Holiness Patriarch Kirill of Moscow and All Russia and Patriarch Neophyte of Bulgaria. 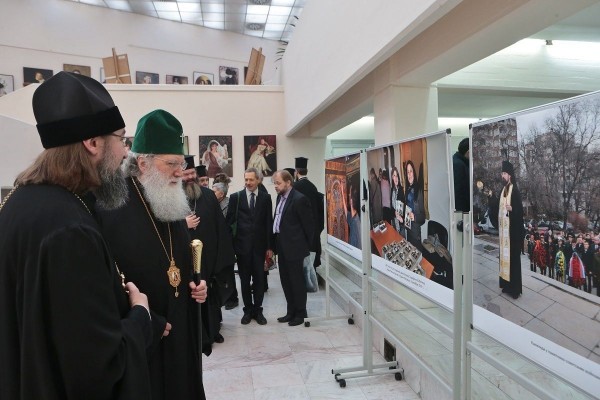 The conference was timed to the centenary of the consecration of the Russian Church of St. Nicholas of Myra in Lycia – the representation of the Patriarch of Moscow and All Russia to the Bulgarian Patriarchal Throne.

Among those attending the conference were His Holiness Patriarch Neophyte of Bulgaria, Metropolitans Dometian of Vidin and Joan of Varna, Metropolitan Kirill of Yekaterinburg and Verkhoturje, Metropolitan Mitrofan of Lugansk and Alchevsk, chairman of the Department for External Church Relations of the Ukrainian Orthodox Church, Ambassador Isakov of the Russian Federation to Bulgaria, and many representatives of theological and scholarly circles.

Metropolitan Mitrofan of Lugansk and Alchevsk greeted the participants on behalf of Metropolitan Onufry of Kiev and All Ukraine.

The participants in the conference received many telegrams of greetings from the state and public figures.

The key report was presented by archimandrite Filipp (Vasiltsev), rector of the Church of St. Nicholas.

An exhibition of photographs, ‘Centenary of the consecration of the Church of St. Nicholas in Sofia’, was opened which covers the most interesting events of the last three years, such as the 130th anniversary of Archbishop Serafim (Sobolev), the enthronement of His Holiness Patriarch Neophyte, the visit of His Holiness Patriarch Kirill to Bulgaria, and restoration of paintings in the church.

The conference continued its work in sections. 15 reports were presented by the speakers from Russia, Ukraine, Bulgaria, Italy and France.