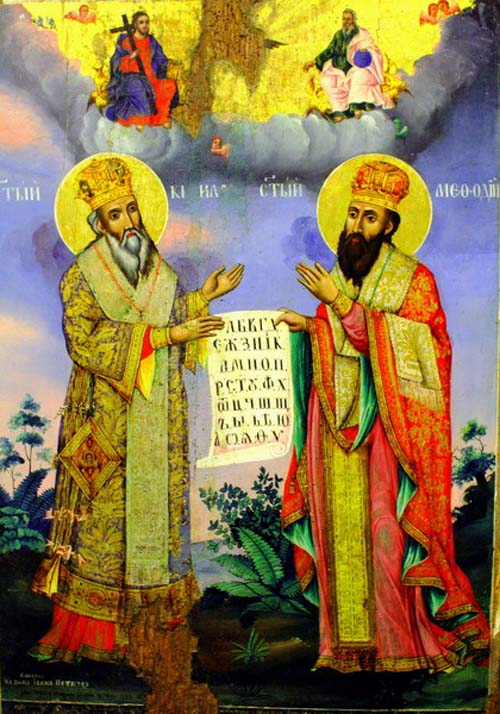 The saints, who were brothers, lived in the 9th century. Cyril is thought to have been born in 827 – 828, while Methodius – in 815 – 820 in Thessaloniki, Byzantine Empire. They are generally considered by scholars Byzantine Greeks.

The saints are said to have been the principal Christian missionaries among the Slavic peoples of Great Moravia and Pannonia, introducing Orthodox Christianity and writing to the hitherto illiterate, pagan Slav migrants into parts of Macedonia and elsewhere in the Balkans.

Saints Cyril and Methodius are also thought the people who invented the Glagolitic alphabet, the first alphabet Old Church Slavonic was transcribed in.

The Bulgarian school in Plovdiv organised the first celebration dedicated to the saints in 1851 in the city of Plovdiv at the idea of Nayden Gerov, who was a prominent figure in the Bulgarian National Revival period.

The initiative of Plovdiv teachers spread to other Bulgarian towns and cities in the 1860s.

May 11 gradually turned into a celebration of enlightenment for all Bulgarians.

The anthem of Bulgarian enlightenment, Varvi, Narode Vazrodeni was sung for the first time in 1900. Writer Stoyan Mihaylovski was the author of the text, while composer Panayot Pipkov wrote the music.

There is evidence this day was a celebration of Bulgarian enlightenment even in the 12th century.

Cyril and Methodius were canonised as saints as their pupils came to Bulgaria in 1886.

Sources used: Wikipedia and others