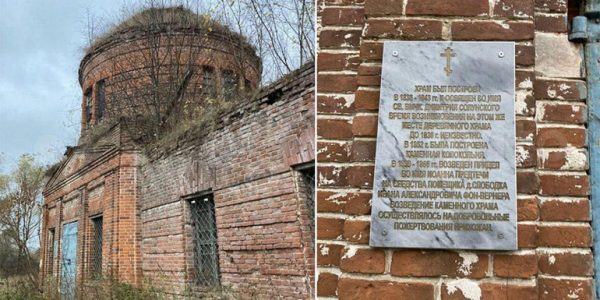 The situation with the 19th century church in honor of the Great Martyr Demetrius of Thessaloniki was successfully resolved in the Tula region. Put up for sale on one of the popular sites, it was bought by a businessman from Moscow and returned to believers.

The announcement of the sale of a church destroyed during the Soviet era in the village of Zavalovo, Odoyevsky District, Tula region, appeared on the Internet in December 2020, reports the website of the Belevsk Diocese.

The event caused a great public outcry. Pavel Osipov, general director of the Kremlin Capital Management JSC, did not remain indifferent to the situation. The businessman decided to buy the temple in order to return it to the faithful and, thereby, to revive the shrine.

It took several months to agree on the procedure for donating a temple to the Church. On April 16, 2021, all formalities were settled, after which the final decision on the transfer of the temple and the site to the parish followed.

“It is noteworthy that this coincided with a significant event in the life of Pavel Osipov – he has become a father. Thus a new life of a new human being and the temple began in one day,” the message says.

The 19th century church in honor of the Great Martyr Demetrius of Thessaloniki in the village of Zavalovo is an architectural monument of regional significance. It is known that until 1836 it was made of wood, but due to its dilapidation, the construction of a stone building began at the same time at the expense of parishioners and benefactors.

The new stone church was completed in 1843 and, as before, was dedicated to St. Demetrius of Thessaloniki. In 1852, a two-tiered stone bell tower was erected. In 1859-1866, a chapel in the name of St. John the Baptist was built on the church’s premises at the expense of the landowner of the village of Slobodki, Odoevsky district, collegiate secretary, John von Werner.

In 1894, a literacy school was opened at the church, and the parish became a place of spiritual and intellectual education for residents of the entire Odoevsky district.

In the first half of the twentieth century, St. Demetrius Church was closed. And after the collapse of the USSR, the land, along with the temple, was in private ownership, several times passing from hand to hand. At the same time, the owners did not care about the restoration of the shrine. The temple was put up for sale after the bankruptcy of its last owner.

At the moment, the temple has been finally transferred to the parish. It is in satisfactory condition, but requires serious restoration. The diocese hopes that thanks to caring people, the shrine will be restored and again become an important religious and cultural center of the Tula region.