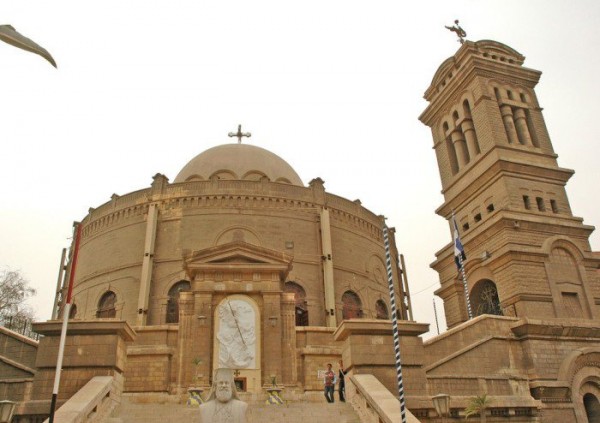 The two men met yesterday, January 14, and cordially discussed about the church. The Patriarch informed the Egyptian Prime Minister about the final phase of the historical St. George church renovation.

Mahlab praised the multifaceted work of Patriarch Theodore and assured him that the upcoming inauguration events will be placed under the auspices of the country’s President. He also stressed that the church – the only Rotunda in all of Middle East – is a symbol of friendship between the people of Egypt, Greece and Cyprus as well as a symbol of coexistence and respect between Christians and Muslims.

The Church of St. George in Cairo is the main Greek Orthodox church of Egypt. It was built in the 10th century on top of a Roman tower of the fortified town called Babylon, but the original structure was destroyed by a fire. The present church was built in 1904. The unique Church of St. George is the only round church found in Egypt and it is the seat of the Greek Patriarchate of Alexandria.

Most viewed articles
How Often Do We Come to Church and Worship God?131
Using Boredom to Cultivate the Soul119
Patriarch Kirill’s Sermon on Holy Pentecost91
Holy Pentecost Celebrated at Kiev-Pechersk Lavra67
Flying By The Instruments64
Patriarch Daniel: The Church Is Not Founded by Human Agreement. It Is the Extension of Christ’s Life54
The Feast of Pentecost Celebrated at the Patriarchate of Jerusalem51
Patriarch Kirill Congratulates Metropolitan Onuphry on the 50th Anniversary of His Ordination50
Patriarch Kirill: “Amazing Unity of Our People Occurred During Great Patriotic War”31
It’s Not Enough Just to Defeat Evil1
Most popular authors
Pravmir.com team199
Priest Luke A. Veronis131
Eric Hyde119
Patriarch Kirill of Moscow and All Russia91
Archpriest Lawrence Farley64
Aurelian Iftimiu54
Protopresbyter Themistoklis Mourtzanos1