Source: Daily Sabah
Natalya Mihailova | 07 May 2014
ISTANBUL — Numerous supporters of controversial imam Fethullah Gülen recently started a campaign on Twitter calling for the Hagia Sophia to be reopened as a mosque. The move, which is also being supported by numerous politicians, has been questioned by others who note that Gülenists purport to promote dialogue and tolerance toward other faiths. 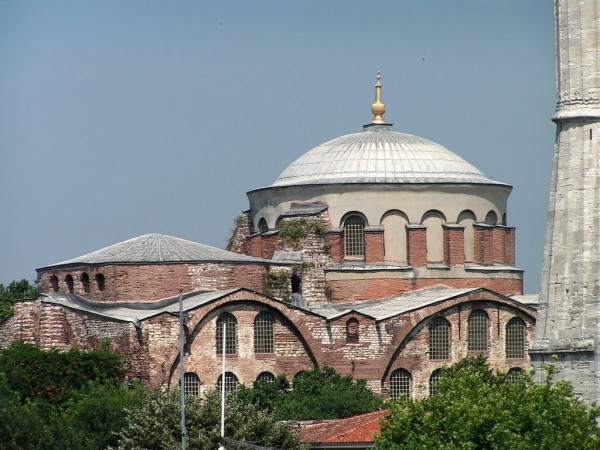 Recently Hami Yıldırım, a parliamentarian from Burdur who stepped down from his position at the AK Party and became an independent, submitted an official request to the Turkish Parliamentary Speaker’s Office to reopen the Hagia Sophia as a mosque for Muslims to worship.

This move was criticized by Bülent Turan, an AK Party parliamentarian from Istanbul, who claimed Yıldırım was “trying to [take credit]” in the event the mosque is opened for prayers. Ahmet Taşgetiren from Star newspaper has noted the move is extremely risky for the Gülen Movement as it endangers the ideology of “dialogue” with other religions which they claim is a cornerstone of their views.

Others have claimed the campaign’s timing signals other motives as it came on the agenda right before the presidential election. Taşgetiren says that the Hagia Sophia should be reopened as a mosque but Turkey currently does not possess the power to do it or maintain it as a house of worship.

Deputy Prime Minister Bülent Arınç in a recent press statement said that the government is not likely to make such important decisions solely based on a social media campaign as it may have consequences and negative implications.

The Hagia Sophia was constructed in 537 as a Greek Orthodox Church in Istanbul and served as an Eastern Orthodox Cathedral until 1453 when Istanbul was conquered by the Ottoman Sultan Mehmed II who converted it into a mosque.

The Hagia Sophia remained a mosque until 1931 when it was closed to the public for four years. It was reopened in 1935 as a museum by the Republic of Turkey. It has served as inspiration for many other Ottoman mosques, such as the iconic Blue Mosque, Şehzade Mosque, Süleymaniye Mosque, Rüstem Pasha Mosque and Kılıç Ali Paşa Mosque.

Most viewed articles
Metropolitan Hilarion of Eastern America and New York to Be Buried in Jordanville on May 22174
Patriarch Kirill: The Peoples of Russia and Ukraine Have No Interest in the Conflict166
Communion restored between the Serbian Orthodox Church and the Macedonian Orthodox Church – Ohrid Archbishopric119
Metropolitan Hilarion of Eastern America and New York Reposes in the Lord118
What Do We Celebrate at Mid-Pentecost?102
Celebrating 100 Years with Paschal Joy64
Patriarch of Serbia to Concelebrate with Archbishop Stephen of Ohrid43
Family Life and Spiritual Warfare30
China’s Internet Clampdown Is Step Closer to ‘Cancelling Christianity’12
Most popular authors
Pravmir.com team620
Ioannis Foundoulis102
Priest Luke A. Veronis64
Archpriest Michael Gillis30
Donna Birrell12