Source: OCA
We’re all well aware of the urgent and genuine needs of our neighbors. And since the Orthodox Church is pretty much everywhere in the world, the word “neighbor” for us has global application.
Archpriest Daniel Kovalak | 23 November 2014 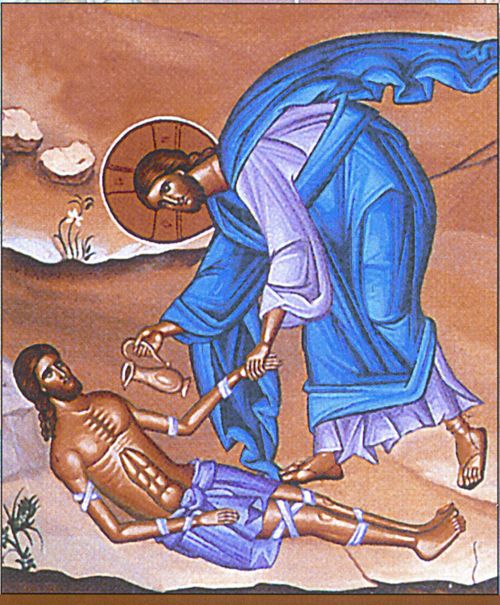 “No one will be saved simply by knowing God’s will; salvation lies in doing it” [Saint Nicholas of Zicha]

The famous parable of the Good Samaritan tells of a man being mugged and left half dead on the road from Jerusalem to Jericho. The first to come upon him were a priest and a Levite, but they passed by. We’re not told the reasons they passed by, but can speculate. The levite, a “religious professional,” was likely enroute to or from “work.”  The priest was perhaps fearful he’d defile himself and thus become unable to perform his priestly service by coming into contact with someone shedding blood. Maybe they were just running late, afraid they too would be mugged, or even that the wounded man was faking his injuries. This is worthy of thought. After all, don’t we sometimes pass by needy neighbors for similar reasons?!

In any case, along comes our hero, the good Samaritan, who shows compassion to the beaten man, pouring oil and wine on his wounds—symbolic of the mysteries of the Church wherein Christ Himself is manifested as the good Samaritan to us, who are wounded by sin. After applying this primitive treatment, the Samaritan raises the bar in his compassion. He puts the wounded man on his own mule, transports him to a nearby inn, and gives money to the innkeeper to ensure the ongoing care and recovery of the wounded man. In addition, the Samaritan makes a pledge to reimburse the innkeeper for any further expenses incurred. So not only does the Samaritan take a personal interest in a needy neighbor—sharing his time, effort, wine, oil, money, and mule—but he also enlists the support of another. There is really no clearer call to charity than this parable. And as Jesus challenged an inquisitive lawyer to embrace compassion, so too our Holy Church repeatedly challenges us to “go and do likewise.”

We’re all well aware of the urgent and genuine needs of our neighbors. And since the Orthodox Church is pretty much everywhere in the world, the word “neighbor” for us has global application. No, we can’t begin to help everyone, but neither can we violate Our Lord’s commandment to show compassion to the wounded neighbors on our paths or our doorsteps.

Indeed, we should and do show our compassion by praying for them, but that’s not enough. The Bible says, “If a brother or sister is ill-clad and in lack of daily food, and one of you says to them, ‘Go in peace, be warmed and filled,’ without giving them the things needed for the body, what does it profit?” [James 2:14-15].  It’s akin to wishing ‘Merry Christmas’ to someone who’s just lost everything. Our faith must blossom into good works, not just good wishes. Actions always speak louder than words. In fact, in the parable, we notice the absence of words. The Samaritan didn’t interrogate the wounded man, he just acted. What wounded neighbors need is not rhetoric but resources. In identifying Himself with the least of the brethren, Our Lord says, “I was hungry and you gave me food,” not “I was hungry and you formed a task force to discuss it or you applied for a government grant.”  Our financial donations toward various charities, though helping to empower the Church to show compassion on our behalf, don’t absolve us from personal responsibility.

But there is yet another way for us to show compassion for our neighbors that’s not related in the parable.  It’s simply this: If we really love our neighbors, we will also make every effort to warn them not to travel dangerous paths!

The road from Jerusalem to Jericho, where the beaten man had been mugged, had a reputation among locals as being an extremely dangerous one. Some historians refer to it as the “road of blood,” upon which unscrupulous robbers hid, waiting to pounce on new victims. So the story of the good Samaritan would’ve been a “non-story” had some compassionate neighbor told the traveler, “You’re risking your life if you go that way!”  Instead of being called “the good Samaritan,” he could’ve been called “the foolish traveler!”

If we see people following dangerous paths in their lives, if we really love them, isn’t one of the best ways to show them our love to warn them of danger?  As parents, we show compassion to our children in exactly this way—“don’t run into the street, don’t touch a hot stove, don’t get into a car with strangers, don’t hang around with bad people, don’t do drugs, etc.”  Many roads in life are full of danger. Yet how often do we see neighbors following such grievous paths and remain silent or pass them by? Perhaps we ourselves are, knowingly or unknowingly, on such paths, and only the compassion of another can save us from being wounded, beaten or destroyed, or at least incite us to consider an alternate, safer route.

In this sense, the Church must intentionally strive to fulfill the role of Christ as the good Samaritan. The Church is to be a lighthouse that guides lost and wandering souls to the Kingdom of God—“a haven of peace in a tortured world.”  Thus, the Church is a life-saving station that nurtures that equips and dispatches good Samaritans to be neighbors to others, or a spiritual GPS that displays the preferred path to a desired destination and warns of the dangers inherent on other roads.

Each of us has, in our individual lives, been beaten, bruised, wounded and left for dead, in one way or the other, by the “thugs” of passions and sin. But, thanks be to God, Jesus Christ has repeatedly been—and will forever be—our good Samaritan, applying His healing oil and wine to our wounds in the Mysteries of His Holy Church.

Especially as our thoughts now turn to Advent, Thanksgiving and the Great Feast of the Nativity of Our Lord, may our love for our neighbor truly take flesh in doing God’s will, so that we in the Church truly may be the “salt of the earth” and the “light of the world,” for that’s what our good Samaritan, Jesus Christ, calls us to be—and do! 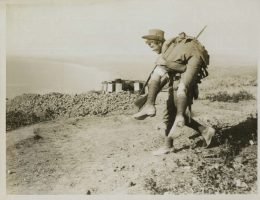 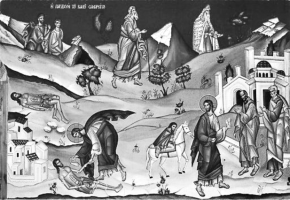 The Parable of the Merciful Samaritan
Metropolitan Anthony of Sourozh

And, behold, a certain lawyer stood up, and tempted him, saying, Master, what shall I do…

“If Christ has not been raised, then our preaching is in vain and your faith is in vain”…